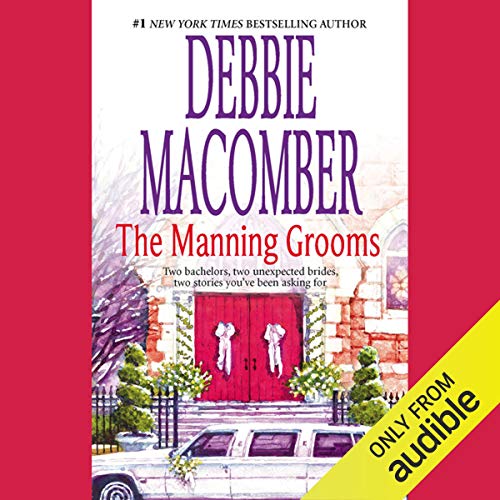 A reluctant groom and an impulsive one, Jason Manning is content with his life as a bachelor, a slob, and a sports fan. Then a precocious girl named Carrie Weston decides to play matchmaker, introducing him to her mother, Charlotte. To his relief, Charlotte is as averse to marriage as he is. But Jason's feelings start to change once he gets to know his Bride on the Loose.

James Wilkens was almost a Manning groom - because he almost married one of the Manning sisters. With that broken engagement behind him, he spends New Year's Eve in Las Vegas...where he meets Summer Lawton. She's just suffered a painful betrayal, and James promises her that in a year, she'll be over it. To prove his point, he makes a date to meet her in Vegas Same Time, Next Year. Except it turns out to be more than a date - it's a wedding!

What listeners say about The Manning Grooms

Loved these clean beautiful Romantic stories. I love romance novels but how romantic are curse words!?

Debbie is an amazing author & I love her books! Love her Hallmark movies too!

I've liked a few of Debbie Macomber's books, she has some sweet mild love stories that are a nice easy listen while working or doing chores. Its quite possible the narrator ruined this one, she should 100% stick to children's books. I mean, she's good at what she does, but the thick syrupy sappy voice made the prude characters that much more prude and old school feeling. I managed to get through the first part, and didn't realize the second part would be such a different story so I took the opportunity to cut myself off of that VOICE. I also found myself wincing way too many times over the story. I wanted to slap the main character in part 1 several times for being such a weak example of a woman.

enjoyed the story. narrator was annoying with one voice at times, but otherwise. I enjoyed it!

Debbie Macomber has done it again and again. I love her stories they are heart warming and depicts real life experiences that we all could face. Both stories were excellent and I recommend listening to the grooms and the brides stories.

Lovely stories even though predictable

It was a lovely set of stories. Very predictable but I still enjoyed the ride.... fun clean stories that just made me feel good and believe in happily ever after.

Speaking of the first story (part 1) It was a really great story - but I was so frustrated with the lead character SPOILER ALERT by really ruining her wedding. All was good in the end Great story, my heart was pumping. Debbie Macomber is AWESOME!

Horrible, horrible narration, and the story is complete predictable drivel! The narrator sounded like she was reading a children’s book.