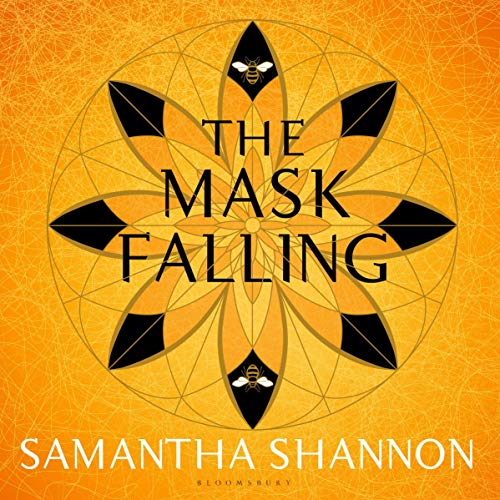 From the New York Times best-selling author of The Bone Season and The Priory of the Orange Tree, the stunning fourth novel set in the world of Scion.

Dreamwalker Paige Mahoney has eluded death again. Snatched from the jaws of captivity and consigned to a safe house in the Scion Citadel of Paris, she finds herself caught between those factions that seek Scion’s downfall and those who would kill to protect the Rephaim’s puppet empire.

The mysterious Domino Program has plans for Paige, but she has ambitions of her own in this new citadel. With Arcturus Mesarthim - her former enemy - at her side, she embarks on an adventure that will lead her from the catacombs of Paris to the glittering hallways of Versailles. Her risks promise high reward: the Parisian underworld could yield the means to escalate her rebellion to outright war.

As Scion widens its bounds and the free world trembles in its shadow, Paige must fight her own memories after her ordeal at the hands of Scion. Meanwhile, she strives to understand her bond with Arcturus, which grows stronger by the day. But there are those who know the revolution began with them - and could end with them....

The Mask Falling is a gripping, fantastical new addition to this "intoxicating urban-fantasy series" (NPR.org) that will leave listeners begging for more.

"Keenly imagined.... Atmospheric and unnerving.... Once again, the predicaments are complicated and suspenseful, the new and returning characters are intriguing.... For all its superbly choreographed action and paranormal inventiveness, this is, at heart, a gripping tale of trust and love, valor and sacrifice, and equality and justice." (Booklist)

"Shannon expertly blends genres to create a story that is at once a political thriller, a dystopian epic, and a paranormal adventure. This bold series installment will leave fans eager for more." (Publishers Weekly)

"Real entertainment. Shannon has continued to build on this imagined world with intricacy, and Paige’s voice comes through to deliver a suspenseful story." (The Washington Post)

What listeners say about The Mask Falling

Endlessly imaginative and compelling—it’s going to be a long wait for the next in the series!

Samantha Shannon was once considered the next J.K. Rowling. While she is a talented writer, she has utterly failed to live up to expectations. A novel should stand on its own and her need to add the “Note on Language” suggests that her work is not strong enough to do so. I really enjoyed this book despite her constant butchering of the French language but her ending commentary promoting her superior woke gender ideology seemed a desperate attempt to appease her woke YA publishers. The irony of the renegade Month Queen being created by an author who used her book to signal her voluntary compliance with the latest political trend (gender-neutral language) is cringe-worthy. The saddest part is that she appears to believe her decision to infuse her on-trend politics in her novel was brave. It may have been had she not begged to explain it with a woke note at the end of her book. Let’s hope she focuses more on plot and less on politics in her future works.

It was a long almost 4 year wait for this book, but boy did Ms. Shannon deliver!

The book begins exactly where The Song Rising ended - with Paige and Warden on a cargo ship set for France. Paris itself was almost its own character, and the underqueen wastes little time trying to forge alliances with the local clairvoyant population.

There were a lot of revelations including betrayals that completely took me by surprise. I was on the edge of my seat for the entire book. Paige's peril is just non-stop. When you don't think it could possibly get worse, it does.

We all know that this is only the 4th book in a 7 book series, but prepare yourself for the biggest cliffhanger ending yet. I can only hope that we won't have to wait 4 more years for the next book.

As for the narration, I feel it is Ms. Collins' best performance thus far. This book was a challenge with A LOT of French dialog and she did a great job with the pronunciation. Another note about all that French dialog - the author doesn't always translate it to English. If you don't have a decent grasp of the language it may get a bit frustrating.

This is another wonderful continuation of a great series. I love the pace and the characters and the story. Just about everything about this series has been top notch. The narrator is spot on. For the most part every character is identifiable and that is saying a lot with the number of characters involved. And I’m amazed at the fluency and the ability Miss Alana has with the French language and all the different accents she has mastered. She is amazing.
HOWEVER! This is a pet peeve with some authors and includes Ms. Shannon: the time frame readers are having to live with between books. I love this story and these characters, but I honestly don’t know if I will live long enough to finish this saga, and it just ticks me off. Even if I weren’t at that “senior” time of my life, if I were in my 20’s, I’d still be irritated at the amount of time I wait for the next book to appear. And, while I respect & acknowledge that a good book takes time, the author appears to be a bit uncaring about her readers. I’ve read a few interviews and she came across to me as being a bit flippant when asked about a timeline. It’s as if she really doesn’t care about when she’ll find time to finish as she has other books and her social media & website on her plate and she’ll fit this in when she can. If she knows that she is going to have seven books in a series I would think she would consider her readers and make arrangements to commit enough time to this series to complete it in a timely manner. Does she honestly expect that people should have to spend 10 years waiting to find out how the story ends? Rather than writing novellas that just m, to me, didn’t add that much to any of this story, why could she not have put that time to the next book? And, even though I love so much about the series, I don’t know that I want to think about waiting, what, another six years plus for three more books. And, again, some of us are at an age that we may never know what happens with these folks. We’ll be dead
I’m the first to admit that I can be impatient, but I think that patience is being pushed here. I understand other books are important and new ideas wing their way into creative minds. I appreciate that. It’s a blessing to have gifted folks share their ideas and imaginations with us. But one should also be courteous to their readers and put some thought into what this does to stress them. I read a lot of books and a lot of authors. Those with series seem, for the most part, to be able to have a timeline, a plan, for the next chapter. I did get involved with another author who wasn’t able to maintain a schedule for one reason or another. I finally gave up on that one. By the time the next volume of the Bone Series comes about I’ve lost my steam. The story is there, but details & timelines & characters are overrun with newer stories & characters from other authors. I care about Paige & Nick & Warden and the others, and I don’t want to lose that interest just because the author is too busy with other stories & characters in another newer series.

Love love love this series, Ms. Shannon, but with each of these books ending with the cliffhangers they do, I’m just getting more and more frustrated with such long waiting periods in between. A restaurant can have the best food in the world, but if one must wait four hours to get their food, well, the taste buds no longer care. The magic has died, and $2.00 tacos or $.50 fries from a fast food place will tame that hunger the same as a $300.00 filet and a baked potato.

The narrator has an unfortunate habit of dropping both volume and pitch every 3 or 4 sentences making it very difficult to hear, especially in anything other than a quiet room and paying full attention. It also sounds weirdly sing song and repetitive because of that. As with most Sci fi and fantasy books, it helps to have already learned/seen made up words in print. I don't speak French so without visual spelling I can't even guess. The last chapter talks about language. A listener may want to listen to it first.

Just a really good and really original story. The whole Bone Season series has kept me guessing and this is no exception. Plus the Alana Kerr Collins does a great job narrating. Looking forward to the next book!

I love this world but…

The plot “twists” become repetitive, the phrasing is definitely repetitive. Still I eagerly await each new installment of Samantha Shannon’s The Bone Season because the plot is generally imaginative and I could listen to Alana Kerr Collins all day.

There are few fantasy sagas that capture both my heart and mind. This is one of them. Creating a parallel universe that splits off from our reality in Victorian England but takes place in the future is not an easy write. Kudos to Shannon!

Who can you trust? Who is a double-agent? Who is after you? For you? Against you? In love with you? Using you?

Trying to describe this book series is impossible because it is honestly must-read-to-understand. I can compare it to... let's see. A cross between Hunger Games and Court of Thorns and Roses... only cleaner. And smarter. And more colorfully written.

Each character brings their own strength. There is something for everyone here... imagination, creativity, intelligence, food-for-thought.... these books are mystery, romance, coming-of-age, and fantasy.

With monikers like Pale Dreamer, White Binder, Red Vision, and The Rag and Bone Man, you are able to visualize masks, intrigue, anonymity and the underworld of future London.

With characters like Paige, Jaxon, Nick, Hector, Warden, and Ivy, you are able to run the gamut of emotions while launching headlong into dreamscapes, underground cities, and candle-lit seances.

Waiting anxiously for the next in the series! Hurry please!

I am really in love with this series. Every book has keep me on the edge of my seat.

Loved the performance, loved the story, loved the added depth to the world. Can't wait for the next installment!!

Alana Kerr Collins is one of my favorite narrators. Her accents for each character really paint the picture of the story. With the introduction of France/French in this book, Collins continued to excel.

I cannot wait to re-read this book. 😍