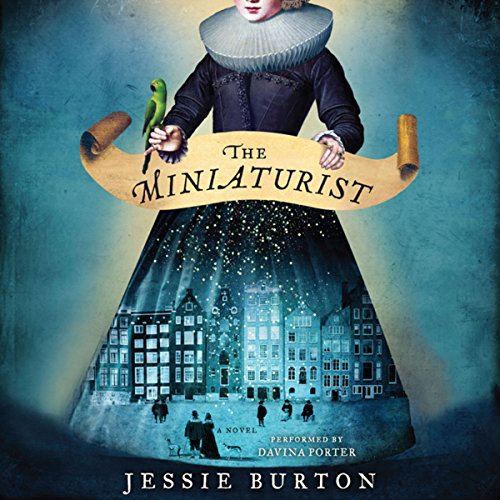 Written by: Jessie Burton
Narrated by: Davina Porter
Try for $0.00

Sold in over 30 territories, this evocative debut in the tradition of Sarah Dunant, Tracey Chevalier, and Emma Donoghue is set among a wealthy, dysfunctional family living in Amsterdam in 1686, during the decline of the Dutch Golden Age

"There is nothing hidden that will not be revealed...."

On an autumn day in 1686, 18-year-old Nella Oortman knocks at the door of a grand house in the wealthiest quarter of Amsterdam. She has come from the country to begin a new life as the wife of the illustrious merchant trader Johannes Brandt, but instead she is met by his sharp-tongued sister, Marin. Only later does Johannes appear and present her with an extraordinary wedding gift: a cabinet-sized replica of their home. It is to be furnished by an elusive miniaturist, whose tiny creations mirror their real-life counterparts in unexpected ways....

Nella is at first mystified by the closed world of the Brandt household, but as she uncovers its secrets she realizes the escalating dangers that await them all. Does the miniaturist hold their fate in her hands? And will she be the key to their salvation or the architect of their downfall?

Beautiful, intoxicating, and filled with heart-pounding suspense, The Miniaturist is a magnificent story of love and obsession, betrayal and retribution, appearance and truth.

What listeners say about The Miniaturist

Not a typical mystery

Most mysteries surround a murder. This one has to do with the person who creates miniature furnishings for a doll house that Nella’s husband gives her for a wedding gift.
As someone for whom Dutch is my mother tongue I was annoyed that an English narrator was chosen who could not pronounce the Dutch names. Surely an English speaking Dutch voice actress could be found.
I also had some wobbles with the writing- specifically why the male figures are referred to as Signeur, when the Dutch Mijnheer would have been used.

What an intriguing story. However, ehile I loved it, I'm left with so many questions for 5he author...!

The miniaturist is a book about a young naive girl an mean religious woman and a wealthy gentleman who all have secrets from each other and amongst the town. It's all about revenge and too much pride.