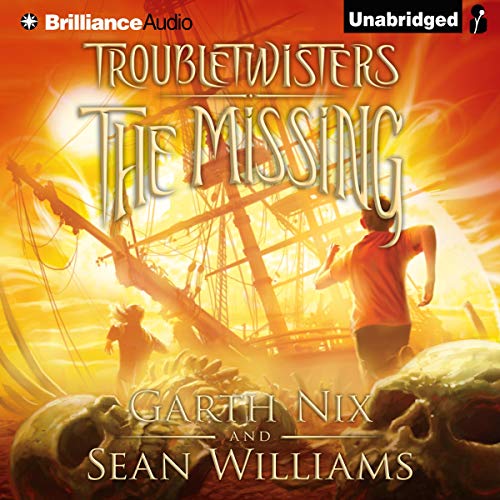 Jack and Jaide Shield have defended themselves against The Evil before - but it's never been as dangerous as this. It isn't just the town of Portland that's threatened, it's the whole Earth . . . and certain dimensions beyond.

The Wardens have devised a plan to get rid of The Evil once and for all. The only problem is that destroying The Evil may also mean abandoning some innocent people - including one of the twins.

The battle against The Evil is going to places it's never been - places Jack and Jaide would have never even imagined possible. Their mission is clear: survive the storm that's coming, and save the ones who are missing.

What listeners say about The Missing

And then Nix and William ran out of ideas

I must admit to having generally mixed feelings about this series. I really like Garth Nix work - Aborhorson &, Keys to the Kingdom but this is weaker. The character in the Troubletwisters have always been more flat and ideas less interesting. Ok so I really liked the cats - who saddly are almost bit parts in this book.

The story starts out promising - the twins are finally going to advance in there training - a mysteries message for help from someone Grammy X knows but then the story flags. All is relived about Grammy X yet it presented in such a way that no suspense is allowed to build up.

Personally I would say there is wiggly room for more books - maybe they just wanted to a sequel series rather then try to keep Jake and Jade.

If your adult for your own pleasure it's about 3.5 - for kids (middle school crowd) it's likely better but not by much.