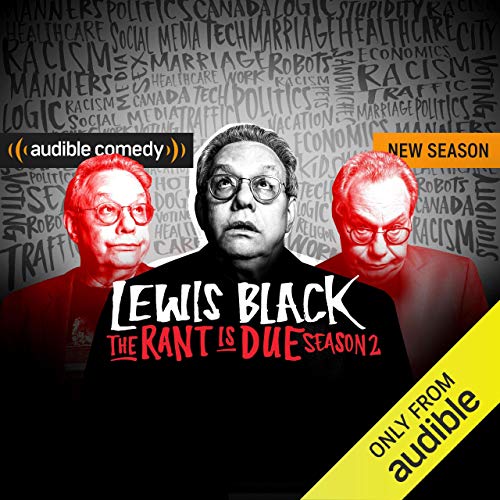 The Rant is Due Season 2

This time with behind-the-scenes moments from the Lewis Black tour bus, as well as occasional phone calls to the people behind the rants.

From hate for pickles to disdain for online dating, this show channels the rage of your 300 million neighbors and truly has something for everybody.

What listeners say about The Rant is Due Season 2

I loved it! I am a fan of Lewis Black, but this amplify-your-rant idea is perfect for the times we are living in!

Lewis Black is one amazing comic and my one wish is for the episodes to be longer!

The Rant is Due Season 2 Review

The Rant is Due Season 2 is great.

Irreverent and funny as usually

Lewis Black, what can I say? Can’t wait until he’s able to get back on the road and we can see him live again.

Lewis Black's rants are cathartic in the best way possible. You really feel a weight lifted from your shoulders listening to him yell, and you feel like he is yelling for you. He is funny and totally unapologetic! I hope that there will be more rants here very soon... after all, come on, Lewis needs to rant for us during this pandemic and crazy! PLEASE LEWIS!

Lewis has always been able to say what everyone else is thinking. I laughed till I cried.

laughed my ask off

make the second season 1 File!!! as is its super annoying to play each separately!!!!

I love this series I would love a season 3. LB is the best one.

So glad this project keeps going

I'm so glad Lewis is continuing to do this with Audible. His style and common sense attitude is a great fit for a rant. Lewis and Audible allow for people to send in their rants on whatever subject and Lewis reads them to a live audience. If he is reading someone else's rant he reads it in classic Lewis Black style. Whether its Lewis's own rant or someone else's... it's hilarious.

The previous season was about 5 or 6 minutes per rant... Season 2 is anywhere from 12 to 15 minutes per episode. The extra minutes are more than welcome. Keep 'em coming please...

Great for a short listen during the day to put a smile on your face.