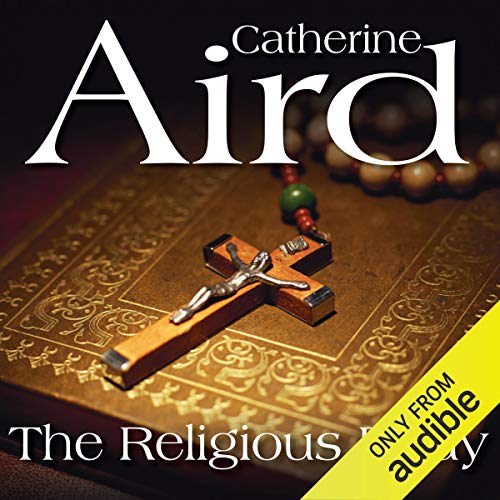 Written by: Catherine Aird
Narrated by: Robin Bailey
Try for $0.00

Who would want to kill a nun? That was the problem facing Inspector C.D. Sloan of the Berebury CID when the body of Sister Anne was found at the foot of the cellar steps at the Convent of St Anselm.

Sloan soon found that interviewing half a hundred black-habited sisters as potential suspects for murder was no easy task - especially when he realised that, to him, one nun looked very much like the next, and every sister had an assumed name - and a past...

What listeners say about The Religious Body

In <strong>The Religious Body</strong> by Catherine Aird, all is still at the Convent of St. Anselm when Sister Gertrude goes to wake up all the other 50 nuns. Knowing that Sister Anne's cell sits next to a loud snorer, Sister Gertrude assumes her fellow nun has escaped from the noise unbidden. But when she doesn't see Sister Anne at breakfast, she decides to tell the Reverend Mother, at the same time that Sister Peter discovers that the fingerprint she left on the gradual is of blood.

Now Detective Inspector C.D. Sloan of the Berebury CID enters the scene, for Sister Anne's body has been found at the bottom of the stairs of the cellar. But who would want to kill a nun? Could it be the cousin who suddenly showed up after 20 years? Or boys from the agricultural institute next door? Or even another nun?

With 1966's <strong>The Religious Body</strong>, Catherine Aird entered the world of mystery fiction. She's actually a little late to be considered from the Golden Age of Mystery, but I consider her writing to conform to the style of those of the Golden Age. In this book we first meet Inspector C.D. Sloan, along with his barely competent Detective Constable Crosby. I enjoy the pun Aird uses in creating the name of the medical examiner, Dr. Dab. The British use the term dabs to indicate fingerprints, as seen in the Ngaio Marsh books. The final regular character of the series who gets introduced is Superintendent Lees, who is highly fond of taking adult education classes and citing his new learnings to all and sundry.

<strong>The Religious Body</strong> opens our eyes to the mysterious world of the convent and nuns. We see the day to day routines of the nuns, things they hold fast to as much as possible even amid the disruption of a murder. The nuns are the most frustrating of witnesses, as they make a practice of "guarding their eyes and thoughts." In other words, to them, it is a sin to observe what is going on around them because they should be looking internally and not at the actions of others. Trying to determine how to respond is complicated for them: "Truly it was a difficult path that they chose when they left the world." Even though the nuns seem so confusing and foreign to the detectives, we develop a real respect for the woman who have chosen to take this form of life. We also note the double meaning of the title, both the body of the religious nun who has been murdered and the broader sense of the Christian world in general.

The plot of this book has some really interesting angles. Besides observing life in the convent, we see the actions of the boys at the agricultural Institute next door, who try to burn an effigy of a nun during their Guy Falkes celebration, and this nun is wearing Sister Anne's glasses. We also see the actions of Harold Cartwright, the cousin who had suddenly shown up. Why would he appear out of the blue now? I found the book to be highly engaging, especially the conclusion, which was exciting and surprising.

Robin Bailey performs the audio edition of this book. He sounds really good as the narrator of the book, with a deep voice and good intonations. His voice sounds ideal for the role of C.D. Sloan. I first listened to Bailey in Agatha Christie's <em>The Clocks</em> and was less than impressed with that, but I do like his performance of <strong>The Religious Body</strong>. He delivers his narration with strong expression without any extra emotionalism.

This book is a creative, fun book with a clever premise and unique coinclusion. The detectives have interesting characters, while the writing style is witty, with fun language play. I have listened to this book several times and enjoyed it each one. I give the book five stars.

Inanely Interminable..A Sloth Running a Marathon Would Be Less Plodding

Sweet Jesus..!!.. I thought it would NEVER end.. I am always committed to finishing a book I’ve started ,.. but after this stinker,.. I might have to revise my dedication to see an audiobook to the bitter end... No characters worth getting to know.. narrator needed a drool cup , as he had too much saliva going at any time.. no surprise ending,
no twists, .. nothing of interest.. 😑
UGH

The best part is the narrator!

Mr Bailey brings life to the story. I could not stop listening. One of my favorite narrators now.

Well done. The reading was very good and the writing was excellent. Well composed mystery with good character development.

What made the experience of listening to The Religious Body the most enjoyable?

I disliked the narration. The narrator makes all of the men sound like aristocratic British, uppity and bored.

I found it hard to follow the story only because the narration was so annoying.

I enjoyed the story, but struggled with the narration. His male voices were very similar toveach other with a lazy "public school" drawl that were hard to hear.

One of Aird’s best

Usually, an author’s work improves with later books, but this one was great from the get-go.

Narrator was a bit much at the start but grew on me as it went on. Kind of halfway between William Shatner and... well, someone else dramatic but not AS dramatic as Shatner. Lol

Robin Bailey is a perfect narrator for this British mystery. I look forward to listening to more Catherine Aird books.

Racial overtones took away from the story so sad

"its like finding a nigger in a woodpile" How unfortunate I had enjoyed up until this point the story and the characters but I will think twice listening to this author. UGH
\