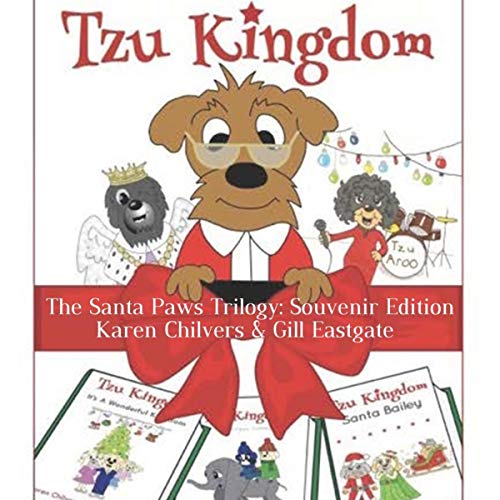 Santa Paws has crash landed on Christmas Eve. He is concussed, as is Team Christmas, and there will be no presents for the dogs of the world unless another fur can take the reins and find others to paw-step up. Fly around the world as "Santa Bailey" and the tzus take to the skies and start a wonderful tradition that brings smiles to the faces of dogs-less-fortunate.

A year on and Santa Paws Invitation reunites the young tzus with their friends in Santa Paws Land to see how Christmas magic works. Enjoy a pleasure flight and meet a new friend, accidentally abandoned and alone in a war-torn zoo. Can Paddy, Stanley, and Maisie rescue her before it is too late?

The next year, Christmas is at risk again when Stanley’s plans go awry and he runs away, only to meet a much-loved Angel King, sent to show him the devastating effect it would have on Queen Coffee, Phoebe, Beth, and others if he had never discovered Tzu Kingdom. Will this plan convince him that, only with him, It’s a Wonderful Kingdom?

What listeners say about The Santa Paws Trilogy