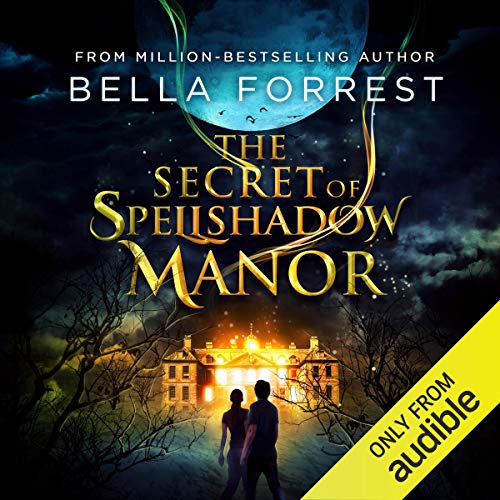 The Secret of Spellshadow Manor

Written by: Bella Forrest
Narrated by: Brian Levinson
Try for $0.00

Book 1 of the best-selling Spellshadow series.

A magic school story with a spine-tingling twist, for adults or teens who enjoyed Harry Potter...

What would you do if you spotted a man following a young woman, but no-one else could see him?

Like most sane people, student Alex Webber thought he was hallucinating - perhaps he'd consumed something bad at the party he'd been attending that night, or he was severely overtired.

But when he sees the mysterious man following Natalie again the very next day, he can no longer disbelieve his eyes.

Although she denies the man's existence, Alex sees her walking with him down a road in his neighborhood he's never seen before - and can't help but follow. After a bizarre, but strangely short journey, he finds himself standing before a towering iron gate wreathed in gray ivy, behind which looms a decrepit old mansion named Spellshadow Manor.

Spellshadow, with its beautiful yet sinisterly decorated hallways, ever-changing outdoor scenery and very unusual residents... Alex will quickly learn it is a place that is as wondrous as it is deadly.

What if you found yourself recruited to an institute of magic, only to discover you really couldn't do magic?

What if your enrollment there was all one big, terrible mistake?

If you were at Spellshadow, you'd keep it a secret. A deep, dark, deadly secret...

Because Spellshadow's elusive Head is hiding a secret of his own - one that Alex soon realizes he and Natalie must uncover at all costs if either of them wishes to leave the Manor alive... and before it's too late.

Mystery, suspense, and oodles of twists and turns; an unforgettable experience awaits you in Spellshadow Manor... Welcome in.

What listeners say about The Secret of Spellshadow Manor

I have tried to listen twice now and can make it past the hookie story and terrible narration. I am thankful for Audibles return policy.

I have listened to almost all of Bella Forrest books and loved them, but the narrator is so terrible I can’t even try this one. His voices are terrible and hearing his lips smack and deep breaths between sentences is terrible. Returned.

I was so disappointed with this audiobook. I really wanted to like but the story and the narrator were not great. It’s very slow moving and boring.

good book full of magic and mystery though weirdly it gave me the heebie jeebies the whole time.

The Secret of spellshadow Manor

I love the book. It was very entertaining. I listened to it while I was working on the computer. It makes it easier to multitask that way when you can listen to your books at the same time.

This was a good book, however, what took the entire book could have been told in just a few chapters and there still isn’t an ending.

Not my favorite book by Bella Forrest! Felt like it dragged on and never really got exciting. So far of all the book series I have read, which is all but the True blood series, this is my least favorite. I am going to give book 2 a try to redeem it's self! I did give performance a 5 because the narrator was good!

I LOVE Bella Forrest's books. I could not get into this book at all. The narration was terrible and the story flow was beyond amateur. Ugh!

I love Amanda .. Who narrated Bella Forrest last books. Unfortunately this guy's voice kind of creeps me out so I'm not even going to get into it...

listen to the whole story but couldn't really get into it. Bella has written other series that flowed better than this book.