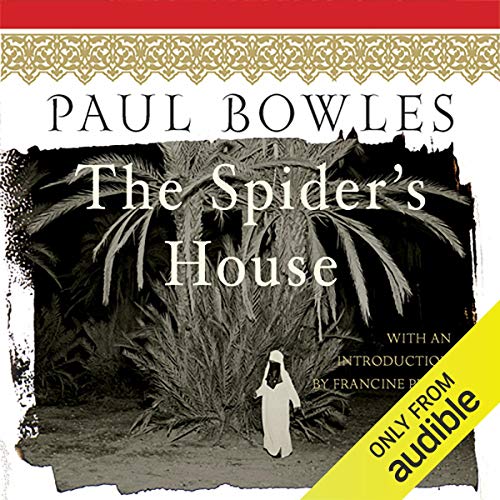 Set in Fez, Morocco, during that country's 1954 nationalist uprising, The Spider's House is perhaps Paul Bowles's most beautifully subtle novel, richly descriptive of its setting and uncompromising in its characterizations. Exploring once again the dilemma of the outsider in an alien society, and the gap in understanding between cultures - recurrent themes of Paul Bowles' writings - The Spider's House is dramatic, brutally honest, and shockingly relevant to today's political situation in the Middle East and elsewhere.

"Paul Bowles is a storyteller of the utmost purity and integrity. He writes of a world before God became man; a world in which men and women in extremis are seen as components in a larger, more elemental drama. His prose is crystalline and his voice unique…. Paul Bowles is sui generis." (Joyce Carol Oates)

What listeners say about The Spider's House

Where does The Spider's House rank among all the audiobooks you’ve listened to so far?

It is up towards the top.

What other book might you compare The Spider's House to and why?

I just finished the Bowles short stories and it is a great reward. I am pleased with that sequence.

What does Peter Ganim bring to the story that you wouldn’t experience if you just read the book?

He is REALLY GREAT. I LOVE his voice for this.

Who was the most memorable character of The Spider's House and why?

I never read Bowles. I am so converted to him thanks to Audible. I have had a big project in a damp cold warehouse in the winter and these hot dry tales of North Africa have been my constant companion and cure. It was an inspired pairing!

Set in Fez during French rule/occupation. Some insight into orthodox Islam and the Western conflicts- Apparently the sharp differences of faith, culture and world view are inherent and ancient in the Middle East . The Spider's House- apt title, reminds me socio economic woes of the Arab underclass are at the root of todays radical attacks.