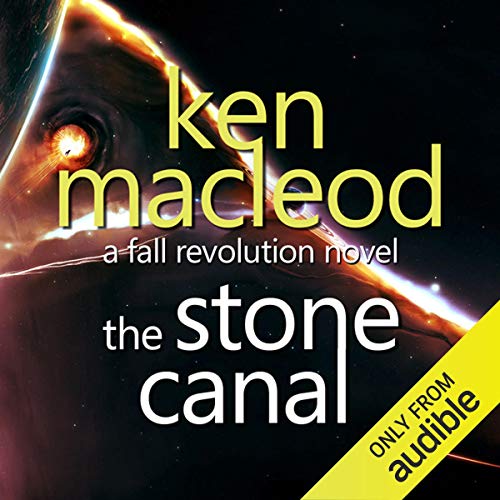 Written by: Ken Macleod
Narrated by: James Lalley
Try for $0.00

Life on New Mars is tough for humans, but death is only a minor inconvenience. The machines know their place, the free market rules all, and only the Abolitionists object. Then a stranger arrives on New Mars, a clone who remember his life on Earth as Jonathan Wilde, the anarchist with a nuclear capability who was accused of losing World War III. This stranger also remembers one David Reid, who now serves as New Mars's leader. Long ago, it turns out, Wilde and Reid had shared ideals and fought over the same women. Moving from 20th-century Scotland through a tumultuous 21st century and outward to humanity's settlement on a planet circling another star, The Stone Canal is idea-driven sci-fi at its best., making real and believable a future where long lives, strange deaths, and unexpected knowledge await those who survive the wars and revolutions to come.

What listeners say about The Stone Canal

I would barely call this science fiction. It is more of a tale of two rivals over a woman, part of which story just happens to be set in the future. Rather than use a variety of very interesting possible sci-fi concepts to enhance the story, they are treated as throw-aways. It is almost as if they are in the way and the author is trying to write around them.

On the other hand he becomes obsessed with some common concepts, like political theory, cigarettes and sex. His constant reference to cigarettes is very distracting. It is difficult to believe that every character in the future is so addicted to tobacco and that it is somehow necessary to describe in every scene which hand they are holding it in, who gave them the cigarette, who lit it, even what direction the smoke is blowing!

I really tried to stick this one out, hoping it would get interesting, but the characters are one-dimensional, the story is plodding and uninteresting, and overall the feel of the book is one of depression and dreariness.