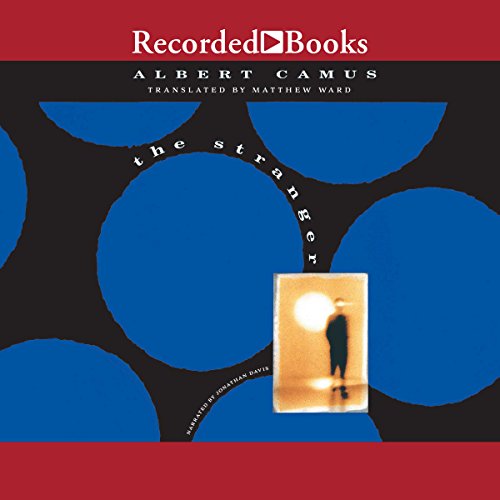 Albert Camus' The Stranger is one of the most widely read novels in the world, with millions of copies sold. It stands as perhaps the greatest existentialist tale ever conceived, and is certainly one of the most important and influential books ever produced. Now, for the first time, this revered masterpiece is available as an unabridged audio production.

When a young Algerian named Meursault kills a man, his subsequent imprisonment and trial are puzzling and absurd. The apparently amoral Meursault, who puts little stock in ideas like love and God, seems to be on trial less for his murderous actions, and more for what the authorities believe is his deficient character.

This remarkable translation by Matthew Ward has been considered the definitive English version since its original publication. It unlocks the prose as no other English version has, allowing the listener to soak up the richness of Camus' ideas.

What listeners say about The Stranger

At its best, I think it's pretty funny. The narrator rarely chooses to speak things passionately, while at other times he gives a much appreciated, more passive delivery.

This was an excellent translation. (I had previously read the book in the original French.) The translator's notes at the end were very interesting. The narrator sounded exactly like I would imagine Meursault would have sounded if the book had originally been written in English.

Existentialism: each individual is solely responsible for giving meaning to life. The accepted cultural morality is absurd and unacceptable. Camus created the character Mersault as the perfect example. He did it so well that I was struck by the amoral, not immoral, life experience of Meursault. He never lied, never considered yesterday and did not worry much about tomorrow. His life was lived now. Even the murder he commits is not enough to get him to feel remorse. In the final confrontation with the priest he verbalizes his "philosophy of life", every life is worth the same and there is no grand meaning to life and whether one lives or dies will not affect the rest of the world as everyone will go on living. Mersault demonstrated this after the death of his mother and as much as he preferred not to die, he knew that if it was today or twenty years from now, it would be the same. He would die and the universe would go on. Thought provoking, I enjoyed it.

It seems a lifetime ago that I first encountered Camus in philosophy classes. I was haunted by him then and the effects have remained with me all these years so I was delighted to have an opportunity to go back to "The Stranger" and read/hear it again. It is fiction but as Camus said (loosely), the novel is just philosophy expressed graphically. It was written in the 1940s when the European world was embroiled in terrible conflicts that called into question all previous beliefs. The Existentialists like Sartre and Camus asked tough questions and this novel expresses those questions in the life of one ordinary man whose life has lost meaning. It is beautifully read and will haunt you.

The Ward translation of "The Stranger," while not universally loved (many prefer the Gilbert translation which I have not read), works well for this audiobook. The reading is well done and recorded properly. It is, pretty much, a perfect audiobook.

A narrator is so important that he or she can make a bad book or break a good book.

In this case, a great book is done even more justice by the narration. Highly recommended.

I sat and listened almost non-stop to this excellent reading of The Sranger. Davis is obviously very familiar with the work and his rendition improved my understanding.

the stranger.
From the cure’s first album came a song inspired by this book. the song is called killing an Arab. I remember the controversy t created in the Arab community and parts of the world. The albums soon required a sticker on the front that gave a brief explanation. It was something to the effect of: this song is not about hatred of Arabs. It is based on the character in the novel the stranger. I had never read this book but when I joined audible it popped in my mind and I got it.
Well thank god for Robert smith (the cure’s singer/songwriter) cuz I love this book. I listen to it over and over. I really identify with the main character. And seeing myself in him helped me too understand some of my natures and come to peace with them. Ahh it is a wonderful book. besides it’s philosophical character it is a great story. This is one of my favorite books.
best, Maynard

I simply could not get as much out of this book without its narrator, for I have not his ability to read. I worry that it influences me too much. At the same time he demonstrates there is no right way to read this book. One of course credits the author for this, and I think the narrator does so with his quiet, intense performance. Hope he's the guy that narrates The Plague.

MAde me think a lot about things in life...

Understanding his descriptions and way of thinking, his nihilist way of thinking, made me realize how different we are most of the times and how similar we have been in certain moments of my life, I am guessing this could apply to anyone who has read or heard this book. Absolutely happy I heard it and read it too. Awesome book, Awesome writer.

Another classic makes its way to audio in fine form. If you haven't read The Stranger since high school, you may be surprised by which details you remembered and which you forgot (something of a Rorschach in that respect). Regardless of recall, however, you are apt to get more out of this book the second time around, especially because of the version used and the narrator who gives the work a proper and penetrating rhythm that can be missed by the hurried eyes of a reader working the page.