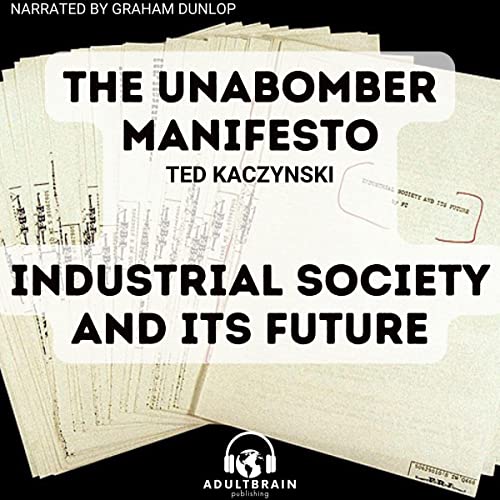 Written by: Ted Kaczynski
Narrated by: Graham Dunlop
Try for $0.00

Industrial Society and Its Future, widely called the Unabomber Manifesto, is a 35,000 word essay by Ted Kaczynski contending that the Industrial Revolution began a harmful process of technology destroying nature, while forcing humans to adapt to machines, and creating a sociopolitical order that suppresses human freedom and potential. The manifesto formed the ideological foundation of Kaczynski's 1978-1995 mail bomb campaign, designed to protect wilderness by hastening the collapse of industrial society.

It was originally printed in 1995 in supplements to Washington Post and New York Times after Kaczynski offered to end his bombing campaign for national exposure. Attorney General Janet Reno authorized the printing to help the FBI identify the author.

Any like minded individuals want to join my "book club" ?

an interesting window into madness

Its interesting to see inside the minds of crazy people, they should make a tv show

I still have my transhumanism leanings, strange fantasies of becoming immortal but I'm moving away from that. I embrace more localism,

I mostly believe technology will help people like amputees or help us figure out how to better treat blindness not this.

If you want understand what’s going on

This guy called like he saw it. We definitely forgot how to live as a society after industrial revolution. I’m not a Luddite but it’s very reasonable to say what we’re doing right now isn’t working and here’s why

Theodore John Kaczynski is remarkably sound in his views about the future of society & its over reliance on technology. As it is now nearly 30 years old, it is astounding how many of his predictions & how much of what was said then, holds up today.

One of the lowest effort recordings for an audio book I have ever heard. Unedited coughs, weird pauses, and slip ups throughout the entire recording. Feels like it was done in one take and shipped out with no oversight or quality control.

One of the most thought provoking books I have read in my years. Shows how most problems with our society emerged as a result of the industrial revolution and its subsequent technological development. If we wish to return to a state of traditional values, community, meaning, and autonomy we must reject our technologically reliant society. Must read for any conservative or libertarian. Truly a based book.

Most relevant essay of our times

I do not endorse the methods utilized by the author in the distribution of this work.