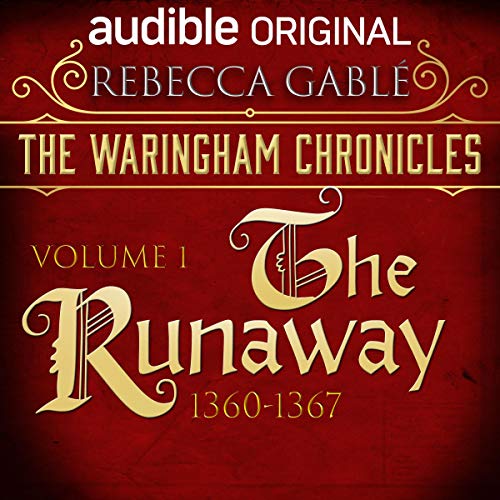 The Waringham Chronicles, Volume 1: The Runaway

England in the 14th Century. Twelve-year-old Robin’s world is turned upside down when his father, the Earl of Waringham, dies in disgrace. His inheritance lost and his family name dishonoured, the penniless Robin must begin a new life as a peasant on his own estate.

He soon makes an enemy in Mortimer, the spoiled young son of the new Earl. As the years pass and the boys enter adulthood, Robin flees Waringham to seek his fortune abroad. In Aquitaine he encounters the Black Prince and the charismatic Duke of Lancaster, and against all odds he begins to restore his position among the nobility. But Robin will need all his ingenuity to navigate these most dangerous and turbulent of times.

In the first of a six-part epic, medieval Europe is brought to life in a multi-cast drama based on the novels by Rebecca Gable, author of the Scarlet City trilogy.

Narrated by Miriam Margolyes, OBE (Harry Potter and the Chamber of Secrets, Romeo + Juliet, Mulan) and featuring a full cast.

What listeners say about The Waringham Chronicles, Volume 1: The Runaway

Why add background music to an audible book?? So distracting and annoying. I wish it could be removed.....

The story is intriguing and I’ll try to stick with it if I can ignore the background.

Excellent story with an excellent cast of speakers. It’s like listening to a movie. I love the sound effects and love the characters. My favorite audible so far.

Fabulous can not wait for Vol. 2

At first I didn't know if I was going to like the sounds and music, but I love it. It really brings the story to life, and what a wonderful story it is. It's beautifully written and told. Going to highly recommend it.

Woke comes to the Middle Ages

Historically inaccurate the main character Robin is an attempt to re-write history in Woke. Utter rubbish - if you want a fantasy listen to this if you want historical fiction don't bother

I listen to a lot of Audible.com books. I don't write a lot of reviews. However this book on all counts; Overall, Performance, & Story was so terrific. What a wonderful period piece. I escaped this pandemic each time I listened. Can't wait for the next volume. Rebecca Gable' hurry up please!!!

I am really getting tried of books that done end, so you are forced to buy the rest of them

A step up from the usual audio book. Good character voices. At first some of the music did not match the scenes but that was corrected and the music added to the story.

Wow, what a great story!

I love how this story was created, written, and the dramatic addition to the story. Absolutely loved it and I can't wait to start listening to Volume 2.

I liked everything about this drama. I like the characters I love the narration but be ready to go on to the next one as the end is to be continued.

This was a great story! The actors were flawless! Can not wait to listen to the second one!