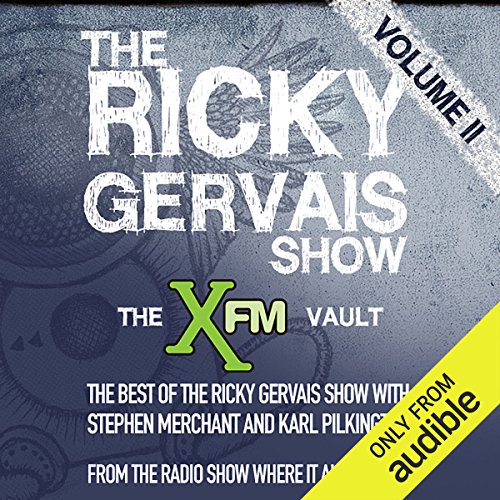 We're back with even more Best Bits of the Ricky Gervais Show on Xfm!

The Ricky Gervais Show on Xfm is where Ricky Gervais and Stephen Merchant first met Karl Pilkington. The trio, who have been talking drivel ever since, later went on to create one of the most downloaded podcasts in history.

This programme brings you a selection of Best Bits from archived material of the second series of The Ricky Gervais Show with Stephen Merchant and Karl Pilkington and includes classic such as 'Man Moths', 'Do You Need 'Em', and 'Educating Ricky'.

What listeners say about The XFM Vault

laughed so hard I cried

next time I'm putting on a depends before I listen to this, LOL LOL LOL

This is the Radio show before the podcasts

First time listeners should download the podcasts and Guides.
Karl Pilkington could be described as a bald, mild-mannered, simpleton but this does not do him justice. Ricky and Steve (of "The Office" and "Extras" fame) brilliantly plum the depths of Karl; exploring the uncharted (and often terrifying) territory that is Karl's simultaneously underused and overused brain. The genius of the show is that Ricky and Steve are astonishingly well-educated on almost every topic one can think of; they are indeed passionate intellectuals. Karl is not. In the radio show the duo simply expounds upon any and all ideas they believe will reveal Karl's gullibility or talent for the absurd (like Karl's bizarre journal readings). They wander onto any and all subjects digressing and laughing away at will. Karl never laughs. I live in the US so this style seems so refreshingly European; Briticisms and references to English celebrities we've never heard of are scattered throughout the constant banter. I've read other reviews of the show that pertain almost exclusively to Karl, but I don't think this does it justice. In these shows Karl becomes the stand-in for all the obstinate, ignorant, and hypocritical realities of the world (Karl stands in for these things but his misguided beliefs are so extreme and so innocent that rather then offend or threaten he makes us laugh). What Ricky and Steve do is vehemently dissect and tackle the lack of reason in Karl's fallacious beliefs and narrow lifestyle. Their reason and powers of logic are so astute and so well founded that the listener is not only satisfied from their delightful humor, anecdotes, and overall musings on life; but from the compounding sense that hearing this enlightened duo shriek and wail upon the benighted "ramblings of a madman" (as Ricky and Steve constantly do to Karl) is a rare and satisfying thing in popular culture.

Disappointed from his humor I am used to from him. I was anticipating more of his stand up comedy as opposed to the podcast style.

I’ve always been a huge fan of Ricky Gervais and Stephen Merchant,I think that Karl Pilkington is absolutely delightful, overall I found the clips hilarious. Would love to have the entire series on here for long trips, or just to hear them again. If only to hear more of Karl’s odd and strangely interesting look at life and his absurd storytelling.

Stephen, Ricky and Karl once again exceed all expectations. Covid-19 boredom got you down? No problem at all as this delightful trio of two comedy geniuses and their frustratingly dim- witted, yet often charming sidekick, turn a potentially dreadful afternoon into a joyous few hours. Thanks Gents, you've been amazing❤❤❤

well worth the money

As are all of the Ricky, Stephen, and Karl performances, this one is funny, well worth what they are priced.