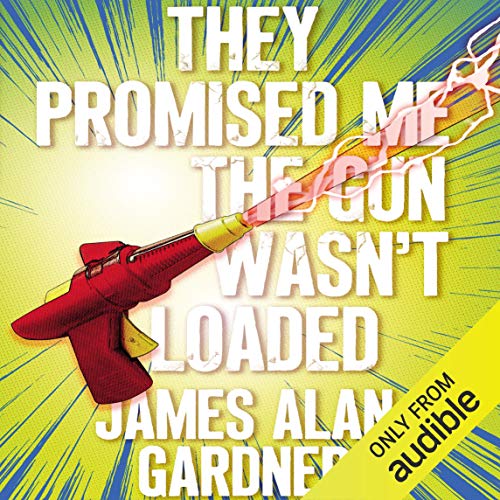 They Promised Me the Gun Wasn't Loaded

Award-winning author James Alan Gardner returns to the superheroic fantasy world of All Those Explosions Were Someone Else's Fault with They Promised Me The Gun Wasn't Loaded.

Only days have passed since a freak accident granted four college students superhuman powers. Now Jools and her friends (who haven’t even picked out a name for their superhero team yet) get caught up in the hunt for a Mad Genius’ misplaced superweapon.

But when Jools falls in with a modern-day Robin Hood and his band of superpowered Merry Men, she finds it hard to sort out the Good Guys from the Bad Guys - and to figure out which side she truly belongs on.

Especially since nobody knows exactly what the Gun does....

What listeners say about They Promised Me the Gun Wasn't Loaded

Emily Woo Zeller is a master of her craft!

incredible continuation of the series, and once again Emily Woo Zeller takes the novel to the next level with her masterful performance. every emotion hangs raw in her words.

I liked it more than the first. it follows a different character, which kinda threw me off at first and ended up more enjoyable

I loved every second

Emily Woo Zeller is great at giving voices to the characters. Great job!

Book 2 in the spark series was even better than the first. I loved every second.

Story was good, but profanity was too much for me

This time the perspective is 99's, which made for fantaxtic one-liners throughout, but eventually this character's unabated self-loathing and over the top profanity overwhelmed the story for me and i found myself not able to enjoy it as much as I did at the beginning. also, some things i figured out early on took "super smart" folks waaaaaaaay tooo long.

I enjoyed this book quite a lot. it was a superhero book but not extreme on the action. it was much heavier on the main character is internal monologue that on any external dialogue.

If I found any faults with it it is a little bit preachy.

The moderator does an excellent job.