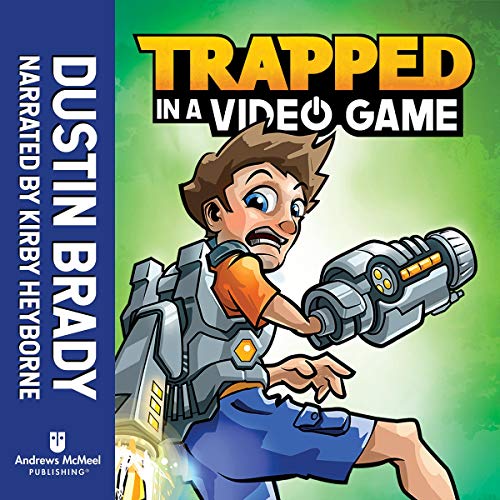 Trapped in a Video Game

Jesse Rigsby hates video games - and for good reason. You see, a video game character is trying to kill him. After getting sucked in the new game Full Blast with his friend Eric, Jesse starts to see the appeal of vaporizing man-size praying mantises while cruising around by jet pack. But pretty soon, a mysterious figure begins following Eric and Jesse, and they discover they can't leave the game. If they don't figure out what's going on fast, they'll be trapped for good!

What listeners say about Trapped in a Video Game

My kids love it, they've listened twice now and still want more. Will be getting the other books soon!

This was a great book, it kept us guessing the whole time and my 10year old loved it.

It's a well written book that kept us laughing and on edge! Can't wait to get into the next 3!

excellent storyline for a child. cliffhanger mskes you want more. i recommend getting series

A must for young ones!

Not only did my 7 year old love it but as did I! It was full of action and funny tidbits.

good story, too much screaming

okay, it was fun. listened to it with the kids. the performance was true to the book but I could have done without the screaming. especially the really long, repeated screaming. that was just cringeworthy. will probably listen to the second one since the kids liked it and it was left at a cliffhanger.

my 9 yr old loved it he usually only reads nonfic

my 9 yr old loved it he usually doesn't like anything non-fiction. he gave me no problem with listening to this book

My son loved it!

My 10 year old said this was the best story he had ever heard. Whenever I turned it off, he asked if he could finish it. I am very satisfied with the book and his immersion into it.