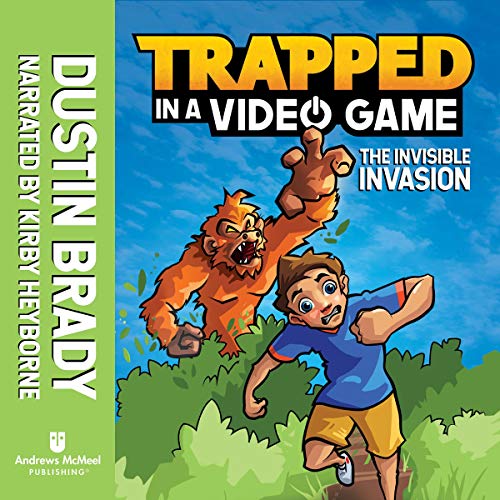 Trapped in a Video Game: The Invisible Invasion

Written by: Dustin Brady
Narrated by: Kirby Heyborne
Try for $0.00

After Full Blast, Jesse Rigsby and his friend Eric has sworn off video games. But when Jesse is offered the chance to save his friend Mark, of course, he says, "yes." Problem is, Jesse is invisible now, sucked into the world of Go Wild, a Pokemon Go-style mobile game.

To reach Mark, Jesse's going to have to shake the Bigfoot chasing him through the school library, survive the velociraptor in the bathroom, and battle the ginormous flame-throwing bat in the cafeteria. Can Jesse stay alive long enough to solve the mystery of what happened to Mark?

What listeners say about Trapped in a Video Game: The Invisible Invasion

We love these books!

Dustin does a great job throwing some humor in the books. Our boys love them!

What a great series, I can’t put it down.

I just started the first book a couple of days ago and I was hooked. And now that I am done with the second book I can say it’s even better than the first. I can’t wait to see what’s in store in the third book.