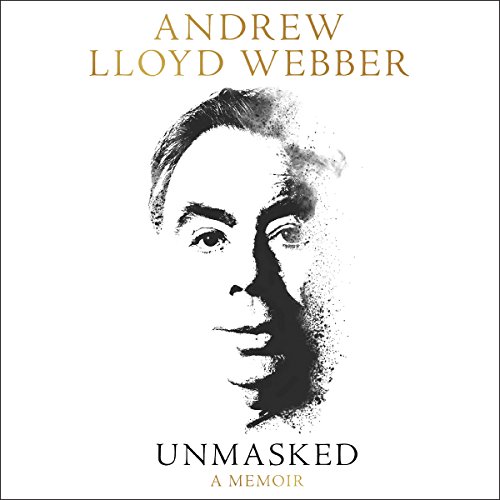 "You have the luck of Croesus on stilts (as my Auntie Vi would have said) if you've had the sort of career, ups and downs, warts and all that I have in that wondrous little corner of show business called musical theatre."

One of the most successful and distinguished artists of our time, Andrew Lloyd Webber has reigned over the musical theatre world for nearly five decades. The winner of numerous awards, including multiple Tonys and an Oscar, Lloyd Webber has enchanted millions worldwide with his music and numerous hit shows, including Jesus Christ Superstar, Evita, Cats, The Phantom of the Opera - Broadway's longest running show - and most recently, School of Rock. In Unmasked, written in his own inimitable, quirky voice, the revered, award-winning composer takes stock of his achievements, the twists of fate and circumstance which brought him both success and disappointment, and the passions that inspire and sustain him.

The son of a music professor and a piano teacher, Lloyd Webber reveals his artistic influences, from his idols Rodgers and Hammerstein and the perfection of South Pacific's "Some Enchanted Evening", to the pop and rock music of the 1960s and Puccini's Tosca, to P. G. Wodehouse and T. S. Eliot. Lloyd Webber recalls his bohemian London youth, reminiscing about the happiest place of his childhood, his homemade Harrington Pavilion - a make-believe world of musical theatre.

A record of several exciting and turbulent decades of British and American musical theatre, Unmasked is ultimately a chronicle of artistic creation. Lloyd Webber looks back at the development of some of his most famous works and illuminates his collaborations with luminaries such as Tim Rice, Cameron Mackintosh, and Trevor Nunn. Taking us behind the scenes of his productions, Lloyd Webber reveals fascinating details about each show, including the creative and logistical challenges and artistic political battles that ensued.

Lloyd Webber shares his recollections of writing songs for a school production that would become his first hit, Joseph and the Amazing Technicolor Dreamcoat; finding the coterie of performers for his classic rock opera Jesus Christ Superstar; developing his first megahit, Evita, which would win seven Tony Awards, including Best Musical; staking his reputation and fortune on the groundbreaking Cats; and making history with The Phantom of the Opera.

"Derek Perkins skillfully handles the majority of the audiobook, giving it a cheeky and well-modulated narration.... Music and theater fans will enjoy this ultimate companion volume to Lloyd Webber works." (AudioFile)

Lost in the weeds

Unless you are well versed in the mechanics of music composition and theory you’ll find the book filled with extraneous details that lend little to the overall story and leave you skimming the text for the real story of ALW’s life.

I loved listening to this book! If you love musical theatre, you will, without a doubt, adore this memoir. It is superb. I hope he will write a follow up!!!!

P.s. I’m still curious about Cats with Judi Dench. Everyone now knows Elaine Paige’s involvement and the classic song “Memory.” But why is there so little about the show when Dench was still part of it. And the song he wrote as sung by Petula Clark - I wonder if the song will ever see the light of day.

An autobiography worth the time

As a mature American male most autobiographies come across to me as either wishful history or sexual fantasies; this one is different. I believe ALW presents his history honestly and provides the reader (listener) with unique insights into the world of musical composition and theater. A very enjoyable book, well read by Mr Perkins.


Unmasked brilliantly portrays the genius that this
man is! Andrew Lloyd Webber 's own words are both captivating and persuasive as to the power of music!!!!

I have been a fan of ALW's works as long as I can remember. It was great to finally get the back story on his life. His talent alone is phenomenal. I am glad I live during this period in time to witness this first hand.

Inside the musical genius of Andrew Lloyd-Webber

I loved this book and the narrator was terrific. It allows the reader to see Mr. Lloyd-Webber's development of a story and than turned into the intricacies of musical theater. I didn't want it to end and I hope he writes a second book that would continue on from the ending to his current works. It was wonderful.

Did not think I would like it. I loved it!!

I really thought I would find this book borning. I was wrong. I loved it. He has lived a very interesting life and I never knew Sir Webber was such a hip fun guy. I never once was bored and I really hope he does a part two to this book as he stops it just as Phantom is a hit. I want to know more Sir Webber, please write the rest.

A great inside look at an emerging genius

Wow. No wonder this is only the first of what he expects to be two volumes! This guys is as prolific with this autobiography as he is as a composer. Lots to tell! I have read 11 books about my all-time favorite composer, Mozart, so I have always wondered about the evolution of my favorite contemporary composer, Mr. Lloyd Webber. I got a bit bogged down in the "inside the industry" parts, although it was interesting even at times juicy. But the parts that really interested me were the human relationships, especially the influences in his youth -- his parents, a favorite aunt and his granny. He shares some very colorful anecdotes. Mr. Lloyd Webber writes without apologizing for his wild success and with appropriate gratitude.

For every fan of musicals

Andrew Lloyd Webber takes us in to his brilliant mind as he describes
The thought and ideas that went into his greatest creations. Most were planned but some just came by accidental inspiration. His discussion of Superstar and Cats and Phantom is not to be missed by anyone who has seen some or all of the shows.

too long, too rambling, a bit pompous

Struggled to get through this one! Mr. Webber thinks we really care about hundreds of irrelevant dates and names, which honestly I cant believe they are accurate anyway. If you are a theater fan, parts are interesting, but he should have cut this in half.