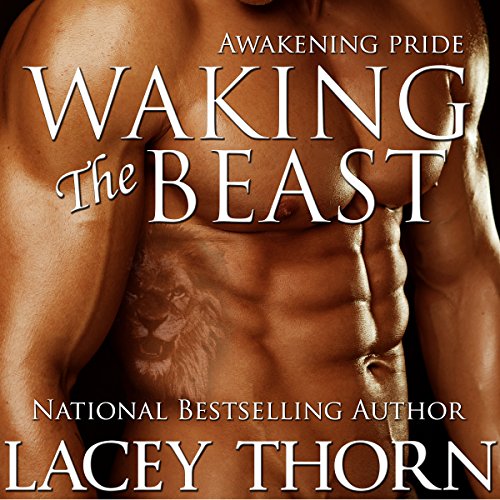 Written by: Lacey Thorn
Narrated by: Audrey Lusk
Try for $0.00

The legend of the Paka Watu.

Ever since she was a young girl, Abby Lane can't resist the allure of a catshifter tribe forced to repress their beasts. On a trip to Africa, she discovers a coveted piece of information - the name the pride leader assumed when he left his home - and she traces his lineage to his descendent.

Utah Pearce can't keep his gaze off the woman who slips into the bar every night. Though not his usual type, she brings out the possessive instinct in him, making him battle with himself as he tries to stay away.

Abby's research never prepared her for the reality in front of her. The beast is waking, and Utah is changing in ways both exciting and terrifying. He is possessive and dominant, and when he finally claims her, neither of them will ever be the same.

What listeners say about Waking the Beast

Would you consider the audio edition of Waking the Beast to be better than the print version?

What was one of the most memorable moments of Waking the Beast?

When Utah realizes Abby is correct about him being a shifter

Who would you have cast as narrator instead of Audrey Lusk?

Just cringe from the narrator

This could be a good series of the author gets a better narrator.

I actually liked the story. The narrator however was horrible. She was so whinny it was hard to get passed her voice to get into the story. I'm returning it.

I only got as far as chapter 6 before I said "that's it, I can't so it anymore". The narration was probably some of the worst I've ever heard. The female narrator sounded like a child and a high school jock. Nothing about it was sexy, the infections were weird and it just felt completely off. The story progresses from two people that are acquaintances to basically dating within such a short span of time that my head spun, and it seemed that this was merely for plot convenience as it didn't really feel like there was much tension leading up to it. It was just "I can't wait much longer" as soon as he noticed a liked him ans then all the sudden they're inseparable. No thanks, I like a little more meat in my plot and narration that doesn't make me feel like I'm listening to nails on a chalkboard.

Great but ugh the narration

Please get new narrator, this whole series is great but for the narrator kills it. Every time I see her name as the narrator I usually wish list the book until I’m desperate for a new book

I can’t even get past the awful narration. I think the story is ok, but the narrator has Abby sounding like a complete airhead and “Taaaaaah” (ugh) sounding like his brain are in his pants. Waste of money!


Abby, the female lead, has always been drawn to lions and Utah, the male lead, is a Shape Shifter.

One day Utah and Abby are kidnapped and he is tortured by the psycho who killed her parents.

Abby and Utah find a way to escape and that's when the real action starts.

The story line has action, adventure, romance. It is very interesting and written well.

Audrey Lusk did a good job with the narration.