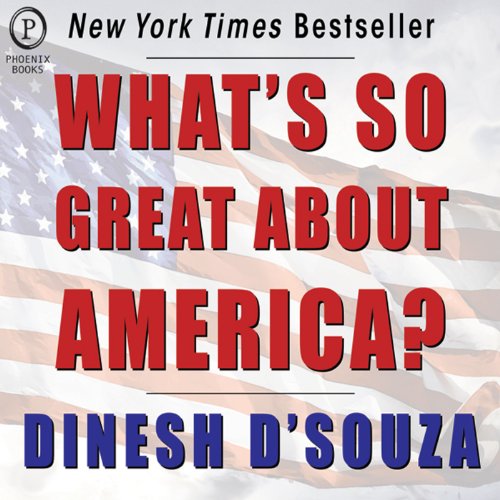 What's So Great About America

America is under attack as never before - not only from terrorists, but from people who provide a rationale for terrorism. Best-selling author Dinesh D'Souza takes on all of America's critics and proves them wrong - as perhaps only a writer with an immigrant's understanding of this country can.

D'Souza presents his case for intelligent patriotism based on an understanding of what really makes America unique in the world. Among other issues, he confronts the hallmarks of criticism of the American way - our history of slavery, colonialism, and materialism. His thought-provoking essay is simply presented. He defends not an idealized America, but America as it really is, and measures America not against utopia, but against the rest of the world.

"Engaging and compelling." (Amazon.com review)
"[D'Souza's] fellow travelers will love it; readers on the left will love to hate it." ( Publishers Weekly)
"His voice as a reader is almost without accent, sounding conversational, friendly and engaging." ( Library Journal)

What listeners say about What's So Great About America

this may be one of the most factual and well written cultural books I have had the pleasure of hearing. although Dinesh is a little slow for me so I had to go at 1.70 speed!

This book was outstanding! It should be required reading at the high school level. Mr. D'Souza has a wonderful ability to break down into concise, yet thourough chapters, the critical aspects of current American life; each of which have been discussed, debated and written about at great length. He provides historical & current political, social and moral perspectives and then leads to thoughtful, well supported, and logical conclusions. If you are entertained by thoughtful insight with relevance to our lives today, you will love this book. I could not stop listening once I started. I will be seeking out his other works.

A must read non adjenda book by an minority

I was astounded by the fairness and unique perspective of a minority whom does not have a political or social hidden "adjenda", actually feels about the current state of america this june 2005. This book is modern and maybe timeless regarding the post 9/11 era. I will now be more aware and proud of what it means to be an american and why our nation is so wonderful in every cherished freedom we have earned and fought with blood for. Highly recommended to liberals or those who question if we are helping others in the world who are much less fortunate and seemingly get hurt by our capitalism and strength of policy or sphere of influence. Conservatives will like it just as well and relate to minorities more easily when trying to explain why we are the greatest nation in the world, not superior but different to other cultures.

I rarely write reviews, but this book is so worthy of your time, I feel compelled to endorse it. I have no idea who the author votes for politically, which speaks volumes for his ability to keep his biases at bay. Very well thought out and reasoned arguments for appreciating and falling in love with your country again.

Would you consider the audio edition of What's So Great About America to be better than the print version?

For me it is. I prefer to read while working out, walking or driving

What was one of the most memorable moments of What's So Great About America?

Several parts, the authors attempts to be fair to all sides and tell a balanced story

It made me feel wiser

I have read and listened to a lot of material on current events. This writer has a fresh, incisive and objective view. I learned a lot and am looking forward to his other books.

This is a straight forward and well thought out treatise on the reasons America is so great and also why somen people profess to "hate" America. Well worth multiple listenings!! 10 stars!

The authors insight, logic, and reasoning is clear and sharp as a diamond and just as valuable. This book crystalizes the essence of what is so great about America and cuts through widely popular fallacies with cold, hard reason. Bravo to Mr. D'Souza for crafting a highly engaging treasure. I was truly captivated. 6 stars!!!

Dinesh has such a deep love for America. He, as an immigrant, has a better understanding of what it means to be an American than any progressives.

I would highly recommend this audio book. Mr. D'Souza provides an excellent overview of world history and how/why it affects how other countries view the USA today. His look at the world opinions of the US were fascinating and credible as he is an immigrant himself. I appreciated his un-biased look at our faults and our triumphs. I came away with a greater appreciation for my country and a better understanding of other cultures. I loved Mr. D'Souza's narration - his voice is clear, understandable, and pleasant.

Common sense takes over in this excellant discussion of history and
the USA.