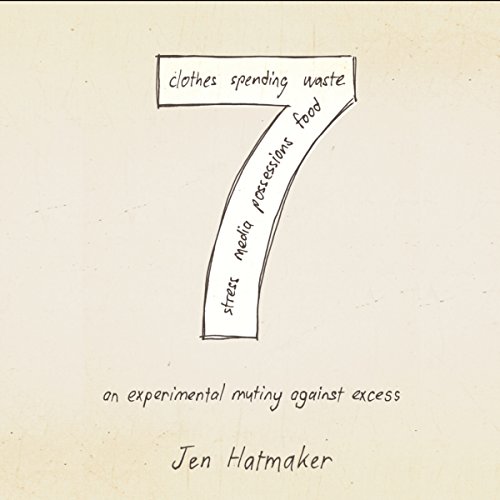 7: An Experimental Mutiny Against Excess

Do you feel trapped in the machine of excess? Jen Hatmaker was. Her friends were. And some might say that our culture is. Jen once considered herself unmotivated by the lure of prosperity, but upon being called "rich" by an undeniably poor child, evidence to the contrary mounted, and a social experiment turned spiritual journey was born. 7 is the true story of how Jen took seven months, identified seven areas of excess, and made seven simple choices to fight back against the modern-day diseases of greed, materialism, and overindulgence.

Food. Clothes. Spending. Media. Possessions. Waste. Stress. Jen and her family would spend 30 days on each topic, boiling it down to the number seven. Only eat seven foods, wear seven articles of clothing, and spend money in seven places. Eliminate use of seven media types, give away seven things each day for one month, adopt seven green habits, and observe "seven sacred pauses".

So, what's the payoff from living a deeply reduced life? It's the discovery of a greatly increased God - a call toward Christlike simplicity and generosity that transcends a social experiment to become a radically better existence. 7 is funny, raw, and not a guilt trip in the making, so come along and consider what Jesus' version of rich, blessed, and generous might look like in your life.

Wish the author had narrated the book herself.

If you could sum up 7: An Experimental Mutiny Against Excess in three words, what would they be?

Jen Hatmaker is an incredible speaker. I wish the author had narrated the book herself. This narration has mispronunciations in a few places that are ridiculous. If the author is an amazing, successful speaker, why on earth not have the author narrate themselves?

Made me rethink many things about the way we live.

Mispronunciations. Her sarcasm is forced when the writer so clearly has an ease and comfort in her writing style. She's not Jen Hatmaker.

What did you learn from 7: An Experimental Mutiny Against Excess that you would use in your daily life?

So many things it's impossible to write in this box.

I loved and hated this book.

The basic idea is reducing categories of life to 7 (ex: wardrobe of seven things, diet of seven foods) in order to fast to see things more clear. Fasting definitely gives clarity from the noise of the world but otherwise the initial good idea leads to a legalistic brag-fest that shames all material goods while ensuring you know about the good things this family is accomplishing.

This book shames wealth of all kinds and dismisses any excess. I agree very much that gluttony, ignorant worldwide consumerism, dismissing the health of our bodies and earth are terrible. I like that she pushes people out of their comfort zone to address the mandate to take care of the needy.

But, to ignore that stewarding wealth correctly is also a way to alleviate many worldwide issues is ignorant. Creating companies that don't abuse workers, are fair in wages, that don't harm the earth are just as important as being a wise consumer. Not everyone has land to garden or the option to choose sustainable companies or buy organic products. Its ironic how privileged her choice of poverty living is while shaming those not living her way.

I wish this book had been more balanced, bragged less, and shamed less. At times her humor was cute and funny but ruined by brash and rude commentary.

Love the rich and poor, listen to what God ask you to do, whether it's big or small. It's all important. Skip this book if you are looking how to serve God's Kingdom.

I've heard Jen Hatmaker in person recently, and the narration captured her style to a "T". This book was incredibly thought-provoking as it untangled the tension around the idea of the excess we find ourselves swimming through daily. I will listen to this book again, if not many times.

More about being religious than about learning about minimalism.

The read is such a turn off for someone who who does not relate to anything religious.

I have the hard copy of this book I purchased back when it was first published. I loved it then and I love it even more now. It’s based around Christian ideas but even if you’re not a Christian, everyone can use the ideas in this book to clear out excess, cut spending, and make room for family, less stress, and most importantly, serving others. I may never go to the extreme Jen goes to, but this book makes me want to live a better life with less. I’m already inspired to cut out Netflix, clean out the clutter, and do better at simplifying my life. I want to listen and read this book at least once a year and I recommend it to everyone I know. Thank you Jen ❤️

Life changing in real tangible desire for more presence and less of unnecessary! One of best books I have ever experienced thank you love it

This book makes you evaluate your life, lifestyle, and choices. It is a MUST READ for anyone who believes in self-reflection.

This was an inspiring book that really forces a person to look at their lifestyle and learned behaviors compared to the needs of others. The beginning was captivating and had my full attention. The middle of the book got long and it was very hard to keep my interest. Stay through the end, it’s worth it. Overall a great book for a Christian woman desiring to improve herself, her life and gain gratitude and perspective.

I really disliked the person reading this. it's hard to over perky or over folksy Jen Hatmaker, but she managed. There was a couple spots that seemed outright racist in their rendering. Not seeing the print, I'm not sure how it was written, but I think it would have been safer to steer away from racial stereotypes.

the book was not Jen's best project. I liked the premise but it's kinda exhausting listening to how hard it is for rich people to live like the rest of us.

Wow I was really impressed with this. Started out not so sure but quickly got hooked and couldn’t stop listening. Great job, Jen!