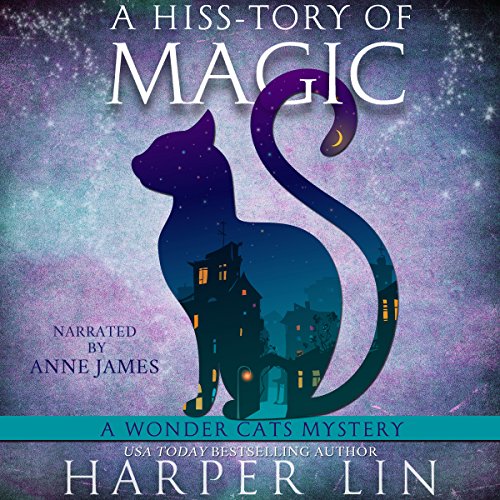 A Hiss-Tory of Magic

Cath Greenstone, her cousin, Bea, and her hippie aunt, Astrid, live in Wonder Falls, a small town near the mystical Niagara Falls. They run the Brew-Ha-Ha café, and naturally, they're witches hiding in plain sight along with their three magical cats, Treacle, Peanut Butter, and Marshmallow.

When Brew-Ha-Ha's baker is burnt to a crisp, along with their beloved café, Aunt Astrid lets out a big family secret: A powerful spell book, a Greenstone heirloom from the Salem days, has been stolen from its secret hiding spot in the café. If it's fallen into the wrong hands, black magic could destroy not only Wonder Falls but the world.

A secret society.... A new detective with a shady past.... A once-bullied local returning to town as a multimillionaire.

Who in town could know Cath's family secret? Cath, Bea, and Astrid must use their witch powers to uncover the deadly truth. Cath communicates with their cats, also magically inclined, and they help uncover more than one secret lurking in wonderful Wonder Falls.

I liked the angle

The concept of the cats telling the story in places and leading the detectives to clues intrigued me. I liked the story.

Nice beginning to a new series

I’ve enjoyed all the books/audiobooks in Harper Lin’s Cape Bay Mystery series and this one too. This one has a wonderful cast of characters, including magical cats. I have listened to others authors’ magical cats but Lin’s are quite different. If you like cozy mysteries and cats you’ll definitely enjoy this one. I can’t wait for the next installment.

Love the story! Great read!! Narrator was great! Very well told!! Love the ability to talk to the cats!!

so good....want more on Audible

great fun story. sad more are not on Audible .
I was addicted and could not turn off

a mystery with magic

Cath - love her, her cousin Bea and Aunt Astrid as well as their cats are on the case. I love this series. I have read them all and liked them so much I wanted to listen to them. Narrator does a great job of switching between characters. If you like mysteries, romance, family interaction, magic and cats then you will love this book.

Good mystery book for kids. It’s a little confusing at the beginning but then the book becomes much more interesting

I absolutely love this series. I have this series in e formatbas well. The narrator does an amazing job bringing each character to life.