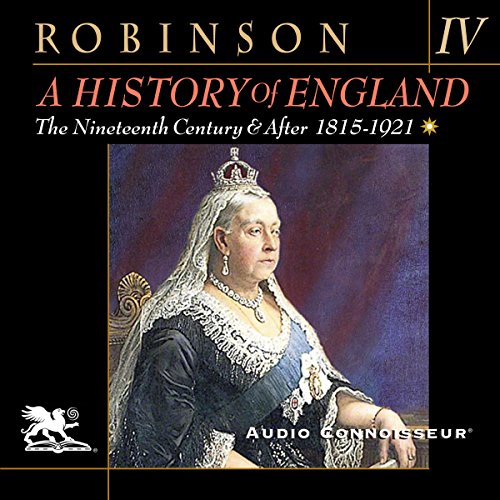 The 19th century witnessed some of the most far-reaching social and political changes in English history. In volume 4, we trace the arc of England's march to worldwide imperial dominance along with the nation's reckoning with her poorest citizens. It is a story of contrast and courage. The contrast is between those with titles, money, and power...and those lacking any or all of these. Courage is reflected in the political leadership of men like Peel, Disraeli, and Gladstone, who understood the urgent need for reform...and carried it out.

Militarily, the British show equal courage in engagements with Russia and Germany, with outstanding contributions from men like Jellicoe and Kitchener. It is a century that finally revealed the promise of the previous century's burgeoning industrial prowess by spreading those benefits broadly enough to lift everyone's standard of living by the 1860s. But throughout, the ongoing tragedy of Ireland continues to weigh on the public conscience until bold leadership finally grants the Irish home rule in 1921. But even as the English nation moves from one triumph to another in the various spheres of literature, art, architecture, science, engineering, politics, and overseas trade and expansion, the 19th century ends on a sour note.

The Boer War in South Africa brings renewed awareness that imperialism brings with it staggering responsibilities (as previously revealed by the midcentury Indian Mutiny). And barely was that costly, bloody conflict brought to a conclusion before the looming struggle with Germany came into focus.

Ce que les auditeurs disent de A History of England, Volume 4: The Nineteenth Century and After: 1815-1921

Excellent coverage with political and military details, and good descriptions of the social milieu of the times.