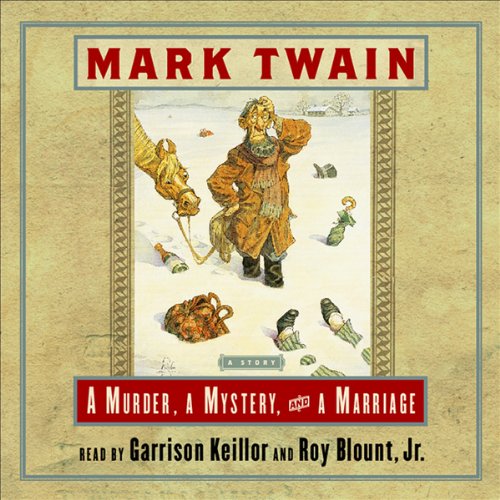 A Murder, a Mystery, and a Marriage

New Mark Twain! This previously unpublished Twain piece was written 125 years ago, composed in 1876 as a "blind novelette" that Twain planned to launch as a competition for other great writers of the day. The competition never took place, and the story was thought by many to have been lost. This rediscovered gem, with a new introduction and afterword by Roy Blount, Jr., and brilliantly read by Blount and Garrison Keillor, allows us, once again, to celebrate the literary genius of Mark Twain.

Set in the quaint hollow of Deer Lick, a mythical town resembling Mark Twain's Hannibal, Missouri, this bizarre tale chronicles the fortunes of humble farmer John Gray, determined to marry off his daughter Mary to the scion of the town's wealthiest family. But the sudden appearance of a stranger found lying unconscious in the snow not only derails Gray's plans, but also leads to a murder whose solution lies at the heart of this tale.

Ce que les auditeurs disent de A Murder, a Mystery, and a Marriage

A Short Story Surrounded... by history

Story itself is very short - rest is rambling tale of how it came to be written, Twain's history and US history... and how they combine. Many quotes from Twain's letters. OK but not what I expected.

The story itself is pure Twain, narrated in pure Garrison Keillor fashion. It's worth a listen for those reasons. For me, it had a particularly nice surprise at the end, when another of my favorite writers turned up as part of the over-the-top resolution. But as noted in another review, the story itself takes up less than half the audiobook. The rest of it consists of a long and rambling afterword, read (badly) by Roy Blount: it starts off talking about the genesis of the story, but somehow wanders off into Reconstruction, Twain's presidential preferences, the genesis of the Mugwump party, and the ethical background of "Huckleberry Finn." Listen to the story, but do yourself a favor and skip the afterword.