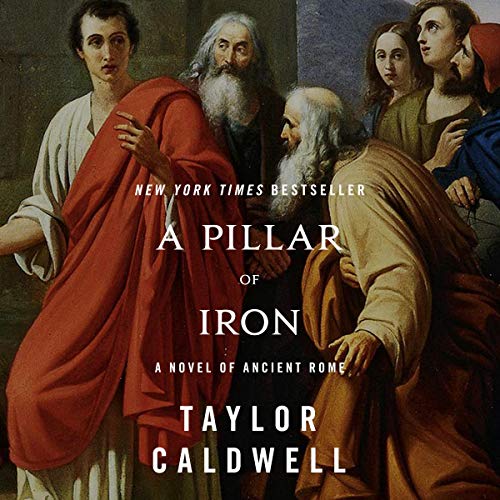 A Pillar of Iron

New York Times Bestseller: A magnificent novel of ancient Rome and the tragic life of Cicero, who tried in vain to save the republic he loved from tyranny.

In this riveting tale, the Roman Empire in its final glory is seen through the eyes of philosopher, orator, and political theorist Marcus Tullius Cicero.

From his birth in 106 BC in the hill town of Arpinum, Cicero, the educated son of a wealthy member of the equestrian order, is destined for greatness. At a young age, he discovers the legend of the Unknown God, the coming Messiah, and it propels the rising lawyer on a journey of spiritual conflict and self-discovery. From his tumultuous family life to his tenuous alliance with Julius Caesar to a fateful love affair with the Roman empress Livia and, finally, to the political role that will make him a target of powerful enemies, A Pillar of Iron is the story of Cicero's legacy as one the greatest influences on Western civilization.

Based on hundreds of speeches, voluminous private correspondence, and ancient texts and manuscripts, this bestselling epic brings into focus Cicero's complicated relationships with his contemporaries, including Caesar, Mark Antony, and Crassus, and brilliantly captures the pageantry, turmoil, and intrigue of life in ancient Rome. According to legendary editor Maxwell Perkins, author "Taylor Caldwell is a storyteller first, last and foremost, and once you begin reading one of her books, you can't help finishing it."

Loved it. Enjoyed the history with feelings and relationships. Interesting hearing the dreams and wornings. Narration was easy to listen to and added to the story.

Definitely worth the investment of 33 hours!

This is grand, sweeping, old-fashioned storytelling at its best, and it's refreshing to experience the slower and more deliberate pace of this story, which allows the reader to get to know each of the personalities involved. I learned a lot, and the examination of the effects of tyranny is very relevant right now.

The preface of this novel explains the endless reseach and experiences the Caldwell’s went theough to bring a true historically accurate novel about Cicero, Julius Cesar,and Rome!
I loved every word. I wasn’t bored a moment. This book made me want to know more about politics as well. They compare Rome with USA at the time of the writing and it compares, easily! It compares to today too! Don’t let this novel scare you! There is sex, love and humor. Personalities were so real i feel like Cicero was an old uncle.
I listened straight through and talked about the novel to everyone and they hung on my every word or should i say Mrs. Caldwells every word. the narration was beautiful and uncomplicated. A true don’t miss!

Not historically accurate. Basically Christian wankery and fanfic masquerading as a historical novel. Not worth it

Her writing, language skills, and the quality of her research is magnificently astounding. 👏

Exceptional in all ways

loved it! we are living through the fall of our republic for same reasons

History written with a moral message reflecting the ideals of the Catholic Church. Cicero was much more; his intelligence and original thinking is dishonored as religious inspiration.

the performance and the story were well done. The words of Cicero are timeless and should be studied by all freedom loving people

Christian fun fiction, nothing " historical" about it. Cicero prays to virgin Mary, hangs out with jewish folk to learn about Adam and Eve and hopes for the arrival of the " messiah" who would save the nations of the world...just the choicest BS in the first couple of hours... 200+ titles from Audible.com ,first time i thought about asking for my money back