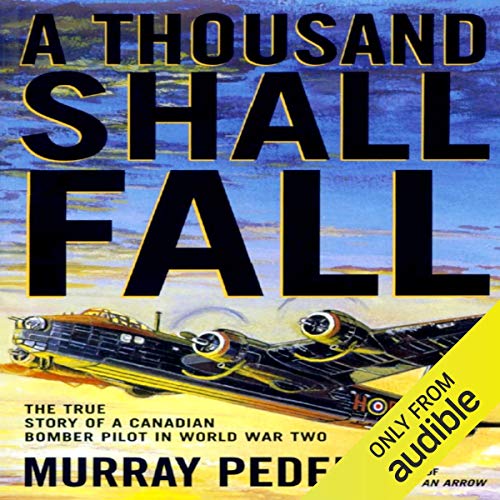 A Thousand Shall Fall

During World War II, Canada trained tens of thousands of airmen under the British Commonwealth Air Training Plan. Those selected for Bomber Command operations went on to rain devastation upon the Third Reich in the great air battles over Europe, but their losses were high.

German fighters and anti-aircraft guns took a terrifying toll. The chances of surviving a tour of duty as a bomber crew were almost nil.

Murray Peden's story of his training in Canada and England, and his crew's operations on Stirlings and Flying Fortresses with 214 Squadron, has been hailed as a classic of war literature. It is a fine blend of the excitement, humour, and tragedy of that eventful era.

This memoir ambles along with enough detail to immerse you, yet not so much that the pace suffers. It is more a series of chronologically arranges anecdotes than a cohesive narrative per se. The narrator, however, lets down the story and writing with his consistently irritating tone, embarrassing imitations of British and American accents, and his annoying whisper-shouting. I feel that if there is shouting in the narrative, there should be shouting in the performance.

This is a simply brilliant account of an ordinary pilot's experience in World War II. It combines both the drama and danger faced by these young men with lots of anecdotes about what it was like to be a servicemen at the time.

I am private pilot myself and am based very close to where the author was stationed. I have flown over the disused airfields in the story without realising their significance.

The writing style is engaging and very enjoyable.

My only criticism (written as a Brit!) is that the narrator did not bother to research pronunciation of British place names. Initially this is amusing, but later it really starts to grate!

Despite that, I'd thoroughly recommend it!

The perspective of just one person. So many WWII books are grandiose coverage of leaders and tactics. This is just the story of one person. The details are so great, the story seems to be day to day and gives the reader a strong feeling of the author's life. Not only a great pilot, Murray is a good writer. This is the book to learn what it took to become a pilot during this short period of history. The humor is refreshing and well done. One of my favorite WWII books. Be sure to read "The Wrong Stuff" and "Above the Thunder" if you like this book.

What does Anthony Haden Salerno bring to the story that you wouldn’t experience if you just read the book?

This book is a collection of stories, most of them very funny. Telling the story is critical, and the narrator does a great job. What fun recording this book must have been for him.

Every pilot should read this book so they know what they missed. Just the story of landing the Tiger Moth is worth the hours invested. I'm not a pilot, but my father was an 8th Air Force pilot 1943 to 1945. Now I know a little more about him.

Anyone interested in Canada ' contributions to the air war over Europe during WW2 will find this book worth while.

A long but interesting account of a Canadian entering the Bomber force and missions in WW2, and of a rather unique bomber, the Short Sterling in action. A great book to keep with your aviation library.Wll worth a listen and the money.

very few detailed accounts of combat in the Stirling over happy valley, dropping supplies to the Macquis, or flying spoof electromic missions in RAF bomber command B17s. An excellent remembrance by a brave Canadian.

Great book, but the narrator mispronounced many Canadian and British military terms and place names. That really detracted from my enjoyment of the book. He is a good performer, but Audible should have used a Canadian for this book to make the performance more authentic.

Both the quality of the writing and the narration are excellent. Peden is a good writer telling an amazing story and the voice work matches with spot on accents from various countries.