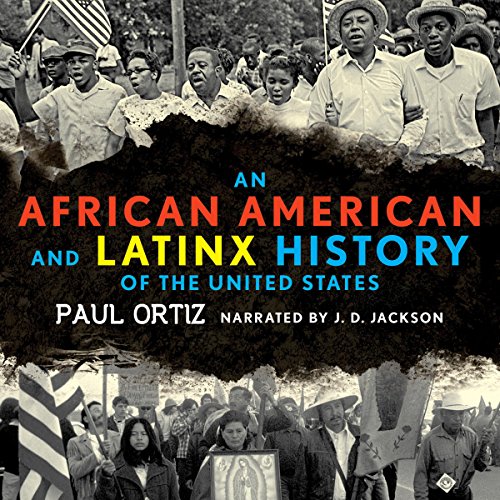 An African American and Latinx History of the United States

Spanning more than 200 years, An African American and Latinx History of the United States is a revolutionary, politically charged narrative history, arguing that the "Global South" was crucial to the development of America as we know it. Scholar and activist Paul Ortiz challenges the notion of westward progress as exalted by widely taught formulations like "manifest destiny" and "Jacksonian democracy", and shows how placing African American, Latinx, and Indigenous voices unapologetically front and center transforms US history into one of the working class organizing against imperialism.

Drawing on rich narratives and primary source documents, Ortiz links racial segregation in the Southwest and the rise and violent fall of a powerful tradition of Mexican labor organizing in the 20th century, to May 1, 2006, known as International Workers' Day, when migrant laborers - Chicana/os, Afrocubanos, and immigrants from every continent on earth - united in resistance on the first "Day Without Immigrants". As African American civil rights activists fought Jim Crow laws and Mexican labor organizers warred against the suffocating grip of capitalism, Black and Spanish-language newspapers, abolitionists, and Latin American revolutionaries coalesced around movements built between people from the United States and people from Central America and the Caribbean. In stark contrast to the resurgence of "America First" rhetoric, Black and Latinx intellectuals and organizers today have historically urged the United States to build bridges of solidarity with the nations of the Americas.

Incisive and timely, this bottom-up history, told from the interconnected vantage points of Latinx and African Americans, reveals the radically different ways that people of the diaspora have addressed issues still plaguing the United States today, and it offers a way forward in the continued struggle for universal civil rights.

"A concise, alternate history of the United States.... A sleek, vital history that effectively shows how, ‘from the outset, inequality was enforced with the whip, the gun, and the United States Constitution.'" (Kirkus Reviews)

"A challenging and necessary approach to understanding our history. A must-read for those who want a deeper perspective than is offered in the traditional history textbook." (Library Journal)

“A welcome antidote to the poison of current reactionary attitudes toward people of color, their cultures, and place in the US.” (Booklist)

I had to return

although the book is well written the fact that they got an American narrator who cannot pronounce the Spanish words properly is revolting to me. The narrator doesn't even come close to pronouncing the spanish words correctly.

History without the story

I was excited about this book especially because I enjoyed the People's History by Zinn. This is a completely different work, sadly. The lens - history through the eyes of African-American and LatinX people in America - could not be more valuable. The book, though, shows such a small sliver of the story that it's hard to grasp and engage. The author relies nearly exclusively on speech texts and media accounts as the primary sources, as if the story could be told through oratory and rhetoric alone. In small measures this could deepen the story, but it lacks substance to tell the tale. For example, to tell the story of African-Americans' support for Cuban independence the author relies on extensive quotes of oratory by organizers, details such as the number of people attending particular organizing speeches, what they applauded, and even the address of the organizing office in New York (?!). Another missing piece, strangely, is the historical context. The author seems to assume that the reader is already knowledgeable about events not traditionally recounted in American histories, such as the details of the Mexican cession, and Mexico's colonial history. What makes Zinn's People's History fascinating and insightful was his ability to make sense of the narrative and then tell American stories from a people's point of view. What's missing from this book: the people, and their stories. I hope another author will fill the gap! Further, I hope that if this narrator takes on another book recounting LatinX themes, he will take the time to learn to authentically pronounce words borrowed from Spanish. The mispronunciations are jarring.

Very enlightening book, but it will truly anger you. Highly recommended read for history buffs.

Powerful and informative and head turning even if you know a bit of true history already.
The introduction alone is poetry filled with some sadness but mostly motivating points. We should have heard these voices, the country/countries, the people's stories all of our lives...let's ALL rewrite history and share this to everyone we know. EASY read.

This is a vitally important subject and provides some really valuable perspectives that are often missed in typical American education. Unfortunately it's also incredibly scattered both in terms of timeline and subject, vaguely broken into ~40-yr chunks but really bouncing all over the place. Incredibly difficult to follow, really needs to be rethought and reorganized in a more structured and focused fashion. Arguments seemingly pop out of nowhere, often with no context, justification, or evidence, and then get glossed over as we move on to the next argument.

Compare to something like The Dictator's Handbook which tackles a similarly sprawling concept, yet establishes and then sticks to a very structured organization. One story at a time in measured fashion, that then brings them all together at each point.

The author and editor(s) need to re-examine and restructure this book in order to engage people more efficiently.

Anyone looking to further educate themselves on the true history of the United States and/or looking to find overdue recognition of for all that People Of Color have given to this country need this book in their lives immediately.

I loved this book, hands down the best history book about Latin and African American history that I've come across in a long while. Many books about the black experience are great, but few dig into the detailed, well research historical events like this one. Give it a read, if this is your type of book as you won't be disappointed.

this was so amazing. I would definitely required this read before you start voting or being all political.

I’d definitely recommend this book for anyone who wants to get a broader perspective on American history instead of the white-washed one you probably received in middle/high school like I did. I’d also definitely consider using this in my US history classes!

White progressives need to read this

This was not the book that I expected and hoped to read, but it turned out to be exactly the book I *needed* to read.

If concepts like "international emancipatory struggle", "the global South", and the importance of black and LatinX people in the American labor movement are new to you, then this book will rock your world and help you realize the importance of reaching across racial, economic, and national lines to combat the rise of oppression we're seeing today.