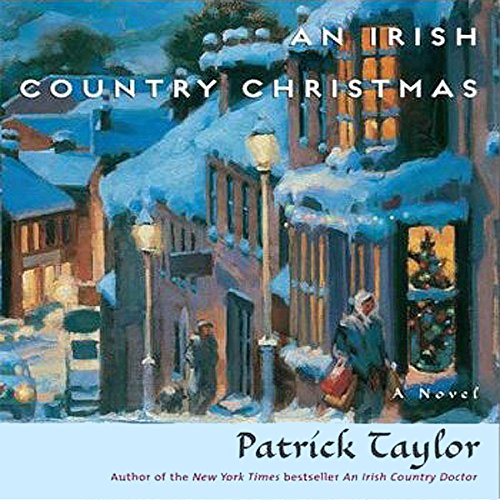 In An Irish Country Christmas, the third book in Patrick Taylor's Irish Country Books, Barry Laverty, M.B., is looking forward to his first Christmas in the cozy village of Ballybucklebo, at least until he learns that his sweetheart, Patricia, might not be coming home for the holidays. That unhappy prospect dampens his spirits somewhat, but Barry has little time to dwell on his romantic disappointments. Christmas may be drawing nigh, but there is little peace to be found on earth, especially for a young doctor plying his trade in the emerald hills and glens of rural Ireland.

Along with his senior partner, Doctor Fingal Flahertie O'Reilly, Barry has his hands full dealing with seasonal coughs and colds, as well as the occasional medical emergency.

To add to the doctors' worries, competition arrives in the form of a patient-poaching new physician whose quackery threatens the health and well-being of the good people of Ballybucklebo. Can one territory support three hungry doctors? Barry has his doubts.

But the wintry days and nights are not without a few tidings of comfort and joy. Between their hectic medical practice, Rugby Club parties, and the kiddies' Christmas pageant, the two doctors still find time to play Santa Claus to a struggling single mother with a sick child and not enough money in the bank. Snow is rare in Ulster, and so are miracles, but that doesn't mean they never happen....

"Full of stories and vivid characters, the novel recalls a good night in a pub. Its greatest charm lies in homey Ulster idioms....Good, light entertainment." ( Booklist)

Exactly what I was looking for!! It makes you think about a time when life moved slower and people really took time to invest in other people.

I really enjoyed this book as my month of December listening from Audible. It was a great warm up for the holiday season. The quirky stories are jumble of funny silliness and difficulties of every day life. The reader gets the feeling and mood of Ireland from the past. Much like a James Herriot book but with human patients. Highly recommended.

The setting: holidaying on the tropical beaches of the Great Barrier Reef, Australia.

Wanted: the ideal holiday book: engaging characters who are in caring, construction relationships (that is, not maiming and killing) and who live in an interesting community.

I’d already read and thoroughly enjoyed An Irish Country Doctor and my holiday decision to continue the series did not disappoint.

Taylor, himself an eminent doctor, clearly enjoys writing these books. He devises a wonderful little village in Ireland, fascinating medical scenarios, interesting relationships and gentle humour. We are drawn into a delightful world fuelled by people the author clearly admires or dislikes. It is enriched with medical knowledge and nostalgia for world of the 1960s where intuition and care played key roles -- and doctors made home visits.

I stumbled upon this marvelous series by Patrick Taylor who depicts life in Ballybuckleboo a village in County Down in the 1960's. The two main likable characters are Dr. Barry Laverty, a recent graduate who is spending his first real job as an assistant to the sightly irascible but genuinely kind-hearted Dr. Fingal O'Reilly. They share the office practice in this rural setting and as they serve as country doctors they also nurture a budding friendship. Both men live in the same residence which also acts as their surgery and they are "looked after" by a delightful, witty middle age housekeeper, "Kinky" Kincaid.
If you want to get in the Christmas spirit, this is a dependable way of doing it - reading "An Irish Country Christmas". But don't miss the other books in the series; they are well worth the listen.
Speaking of listening, John Keating is an absolutely splendid narrator.He brings all the characters to life, no easy task with the wide ranging Irish accents,and transports the listener smack in the middle of Ballybuckleboo.

What made the experience of listening to An Irish Country Christmas the most enjoyable?

The book was well narrated

What does John Keating bring to the story that you wouldn’t experience if you just read the book?

The accent and pronunciation of the Irish names and places

If you could take any character from An Irish Country Christmas out to dinner, who would it be and why?

The old doctor he was brash, had a good dose of common sense mixed with humour and he lived in a time when honour still meant something.

The book it not a page turner, but if you want something pleasant and undemanding that gives a a warm feeling, then you will enjoy this.

i wish i were there

well i have another hard back to buy. this author is a marvel. i feel as tho i am with the doctors as they make there way through life. this book is a must read. this author has a way of keeping me enthralled in the story and very happy to be so. i am waitting, hopefuly not to long, for the next "volume". thank you

I want to go to BallyBuckleBo

A charming glimpse at an Irish village - filled with characters and curmudgeons - people whom I would love to know in person. Spend some time in BallyBuckleBo (sp?) - you won't regret it.

Colorful characters and rich, descriptive language draws the listener in to the small village of Ballybucklebo at Christmas time. I loved escaping to a simpler time and place.

A wonderful holiday listen that includes delightfully original characters who live in a small rural village not far from Belfast. The main story revolves around the towns two doctors, their housemaid and the care of the local residents. They keep busy with births, accidents, regular seasonal illnesses and an occasional disgruntled child who did not get a part they wanted in the yearly Christmas Pageant.

I felt connected to the people and enjoyed the generous, warmhearted environment that is found in this authentic little town called Ballybucklebo. The narrator did an excellent job and I loved all of the believable, colorful voices. A great book to light the holiday spirit.

Would you consider the audio edition of An Irish Country Christmas to be better than the print version?

I really enjoyed the audio versions of all the books in this series. The performer brings it to life for me.

I can't pick one. They were all great.

Yes. I wish I could have listened to it in one setting.

A great series of books! Love the ones I have listened to already.

Loved it, I enjoyed listening each day to and from work. I recommend it