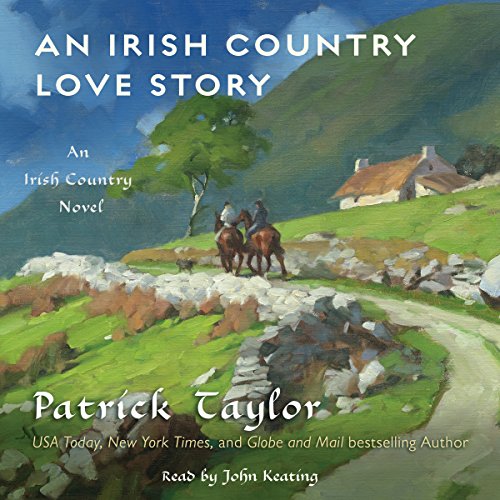 It's the winter of 1967, and snow is on the ground in the colorful Irish village of Ballybucklebo, but the chilly weather can't stop love from warming hearts all over the county. Not just the love between a man and woman, as with young doctor Barry Laverty and his fiancée, Sue Nolan, who are making plans to start a new life together, but also the love of an ailing pensioner for a faithful dog that's gone missing, the love of the local gentry for the great estate they are on the verge of losing, or Dr. Fingal Flahertie O'Reilly's deep and abiding love for his longtime home and practice.

For decades, ever since the war, Number One Main Street, Ballybucklebo, has housed O'Reilly and his practice. In recent years it has also opened its doors to O'Reilly's wife, Barry Laverty, and a new addition to the practice, Dr. Nonie Stevens, a sultry and occasionally prickly young woman who may not be fitting in as well as she should. It is to Number One that patients young and old come when they need a doctor's care for everything from the measles to a rare and baffling blood disease. An unexpected turn of events threatens to drive O'Reilly from his home for good unless the entire village can rally behind their doctor and prove that love really can conquer all.

This is the latest edition in the Irish Country Doctor Series. The story is historical fiction, but Patrick Taylor based the story on his own life as a physician in Northern Ireland from the 1930s through the 1960s. The fictional town of Ballybucklebo and its physicians, Fingal O’Reilly and his new partner Barry Laverty, are the two key characters. The story is filled with fascinating characters that make up the town and countryside. This story takes place in January of 1967 and opens with Sue Nolan saving the life of a sailor that has capsized his boat into the fridge bay water. Sue jumps into a nearby kayak and paddles out to save the man. Sue and Barry’s marriage also takes place in this story. One of my favorite characters is Kinky with her Cork accent. Kinky is the cook and housekeeper for O’Reilly. Kinky also provides the reader with an education on Irish food.

The book is well written and is a delight to read. This is a feel-good book that leaves you with a smile. I started reading this series reading large print hardback books but switched to audiobooks. This series is definitely better read as an audiobook to obtain full enjoyment of the various Irish accents and the correct pronunciation of the Gaelic words.

The book is fourteen hours long. John Keating does an excellent job narrating the story. Keating is an Irish actor and award-winning audiobook narrator.

Skip this one! (And the next)

As always, John Keating is a superb narrator. The story, however, is the weakest yet of the Ballybucklebo series. Far too much time spent on Barry Laverty and not the ever-entertaining Dr. Fingal Flahertie O'Reilly. Additionally, Barry's big dilemma throughout the story is whether or not he wants to have children when he marries Sue Nolan. This internal conflict goes on and on and on. I didn't know that was a such a big thing in 1967, and in Ireland? I thought it was generally accepted as part of the marriage package back then and people looked forward to having children together. Regardless, it's not that entertaining of a quandary.

To be clear, I've read and enjoyed all the Number One Main Street, Ballybucklebo books up till this one. In hindsight, I'd have skipped this one and now the following one, An Irish Country Practice, which I'm half-way through. Barry is STILL hand-wringing over whether he wants to have children or not when he gets married. That plotline couldn't be settled in one book? It's growing tiresome. It's to the point, I'm tempted to skip through the Barry chapters to get back to Dr. O'Reilly!

This was one of my most favorite in the series. The Country doctor books are do funny and entertaining. Patrick Taylor is so talented with his gift of words. The narrator John Keating really brings the words to life with the inflections he uses to to deliver this wonderful story.

Would you listen to An Irish Country Love Story again? Why?

Yes ~ it's a "feel good" book, and it is good to feel good especially in these times.

The characters, the story lines, Ballybucklebo, happy endings ~ everything.

Which character – as performed by John Keating – was your favorite?

That's like choosing a favorite child - they are ALL my favorite!

Who was the most memorable character of An Irish Country Love Story and why?

Can't decide - everyone was memorable in their way.

Love this series of books ~ will listen to another one soon.

I very much enjoy these audible stories. The stories, characterization and narration are all wonderful.

John Keating gives his best performance yet in this Patrick Taylor series. He picks up many new characters and depicts Kitty, Barry, Kinky and Fingal with the same affection and love of characters as he has done thought-out. This last book by Taylor (or is it) ties up many loose ends and some old enemies become dear friends. A perfect way to perhaps end the series but we're all hoping that Taylor is as busy a bee on a hot brick and continues the story

Patrick Taylor does it again. I had been looking forward to my next trip to the wonderful town of Ballybucklebo to see what our wonderful doctors and the crazy characters of the town are up to. John Keating brings the story to life, and I get lost in the story every time . I highly recommend the entire series!

Now that the big wars are over the storylines are much lighter. This was one of the best yet, ready for more!

another lovely book in the series

these books are sweet and charming. they reflect a bit of the life of people in a small Ulster village. It is idealized, but paints a picture of some of the social and gender mores of the time. if you are looking for a dark, angst-ridden story, these are not for you. the characters are delightful and they recur throughout the series so you really get a picture of them in their pretty village. the narration is superb. After about five books, I know the characters’ voices and inflections and personalities. and I have a picture in my mind about how everyone looks.

Wonderful story lots of good history and a perfect production, the narration is just wonderful love this series of books!