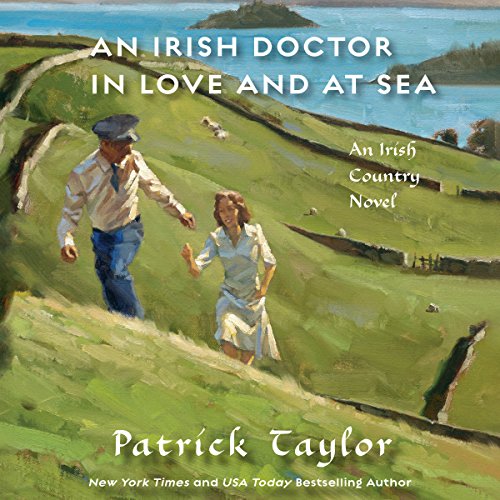 An Irish Doctor in Love and at Sea

Long before Dr. Fingal Flahertie O'Reilly came to the colourful Irish village of Ballybucklebo, young Surgeon-Lieutenant O'Reilly answered the call of duty to serve in World War II. Fingal just wants to marry his beloved Deirdre and live happily ever after. First, he must hone his skills at a British naval hospital before reporting back to the HMS Warspite, where, as a ship's doctor, he faces danger upon the high seas. With German bombers a constant threat, the future has never been more uncertain, but Fingal and Deirdre are determined to make a life together...no matter what may lie ahead.

Decades later the war is long over, and O'Reilly is content to mend the bodies and souls of his patients in Ballybucklebo, but there are still changes and challenges aplenty. A difficult pregnancy as well as an old colleague badly in denial concerning his own serious medical condition test O'Reilly and his young partner, Barry Laverty. But even with all that occupies him in the present, can O'Reilly ever truly let go of the ghosts from his past?

This book like the prior one in the series “An Irish Doctor in Peace and War” is full of flashback memories of World War II. In the prior book O’Reilly was entering anesthesiology training at the Royal Naval Hospital Hasler in Portsmouth. Deirdre meets O’Reilly in Portsmouth to get married. This book picks up as O’Reilly enters training.

In the current time, 1964, O’Reilly attends a medical school reunion and a former classmate is ill. Back in Ballybucklebo Barry is depressed because his fiancée, Sue, has bet a charming Frenchman while on teaching exchange.

The book is well written and is a “feel good” book. The story tells about life in a rural Northern Ireland village in the 1960s. The book is full of gentle humor and emotional stories taking place in the beautiful rural village. In the flashbacks Taylor tells of what life was like during World War II. I still enjoy the housekeeper/cook Kinky and her delightful cork accent and humor.

I have read the majority of books in this series as audiobooks. With all the various accents and Irish words, it is great to have a fantastic narrator, John Keating, able to performs them perfectly. Keating is an Irish actor and audiobook narrator. The book is just over eighteen and a half hours long.

I have listened to every book in this series, read by John Keating, whose ability to capture the varied voices with Irish brogue always keeps me coming back for more. Sadly, as a long time fan of these stories, I am disappointed for the second time in a row, because Patrick Taylor, the author, has chosen to revisit so many of the same chapters in Doctor Fingal Flahertie O’Reilly's life. It's unfair to loyal readers when the characters' are tediously rediscribed in each later book; their life stories retold for the benefit of those who are new to the series. The style of alternating chapters of past experiences at war contrasted with present day married country life would have been better as two separate books.

Wonderfully read and very entertaining. I love the ongoing helpful Dr O'Reilly and his side kick Dr Lafferty. Makes me wish I lived in such a village. Makes me see such a place in my mind.

I have read all of the previous Irish Country Doctor books, and thoroughly enjoyed them. This one ...not so much.

love this series and the narrator

i love this series and the narrator. I strongly recommended it to anyone. very well written and very well preformed

I really love Taylor's books, but this one was hard to trudge trough. If you follow the series, which I hope you do by this point, you know what happens during the war, but you wait for that inevitable ending. The wartime stories are not necessarily a huge downer, but the tone of this book is darker than the rest. I'd still recommend the series, but I was glad to get through this one.

I loved this chapter in the series!

The reader is excellent. I love the variety of voices he uses—especially the Fingle and Donal characters. The story is so well written that even the battle aspects are interesting to me (I get so bored with this type of thing usually). Can’t wait for the next book.

I have loved this series. This one strayed from the ‘format’ and bordered on boring. The segments with Diedre were ridiculously sloppy with the ‘I love you’s’ becoming nauseous.
Kitty’s segments were disjointed and underdeveloped. So sad. I tried to stay with it but it never met the standards of the other Irish Doctor village yarns.

one of the best stories yet

Every once in a while I need a break from a series and wonder if I will ever make it back. I was so glad to come back to this book. Exciting new developments in the past and present. if you were on pause like I was, come back to the series for this one!

Loved it!! So looking forward to the new one!

If I had to pick a favorite book of the series, it would be this one because of the full story of Deidre and because of all the accents!! I have listened to more than half of the series because I love to hear the Irish “accent”. But this book had several more “accents” than Irish. Kudos to the narrator!!