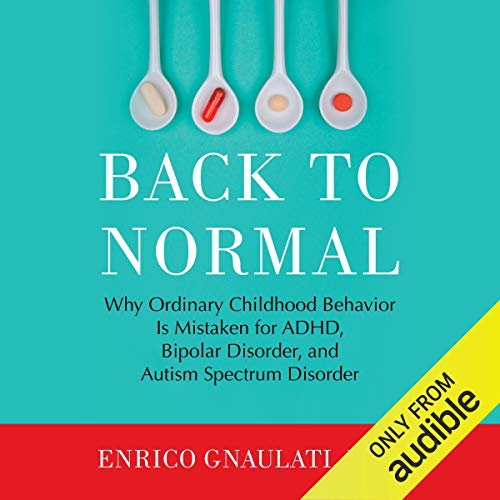 <.p>In recent years there has been an alarming rise in the number of American children and youth assigned a mental health diagnosis. Current data from the Centers for Disease Control reveal a 41 percent increase in rates of ADHD diagnoses over the past decade and a forty-fold spike in bipolar disorder diagnoses. Similarly, diagnoses of autism spectrum disorder has increased by 78 percent since 2002.

Dr. Enrico Gnaulati, a clinical psychologist specializing in childhood and adolescent therapy and assessment, has witnessed firsthand the push to diagnose these disorders in youngsters. Drawing both on his own clinical experience and on cutting-edge research, with Back to Normal he has written the definitive account of why our kids are being dramatically overdiagnosed - and how parents and professionals can distinguish between true psychiatric disorders and normal childhood reactions to stressful life situations.

Gnaulati begins with the complex web of factors that have led to our current crisis. These include questionable education and training practices that cloud mental health professionals' ability to distinguish normal from abnormal behavior in children, monetary incentives favoring prescriptions, check-list diagnosing, and high-stakes testing in schools. We've also developed an increasingly casual attitude about labeling kids and putting them on psychiatric drugs.

So how do we differentiate between a child with, say, Asperger's syndrome and a child who is simply introverted, brainy, and single-minded? As Gnaulati notes, many of the symptoms associated with these disorders are similar to everyday childhood behaviors. In the second half of the book Gnaulati tells detailed stories of wrongly diagnosed kids, providing parents and others with information about the developmental, temperamental, and environmentally driven symptoms that to a casual or untrained eye can mimic a psychiatric disorder.

These stories also reveal how nonmedical interventions, whether in the therapist's office or through changes made at home, can help children.

Back to Normal reminds us of the normalcy of children's seemingly abnormal behavior. It will give parents of struggling children hope, perspective, and direction. And it will make everyone who deals with children question the changes in our society that have contributed to the astonishing increase in childhood psychiatric diagnoses.

My expectation for this book was that it was going to be filled with generalities about how kids in our times are being overdiagnosed with a variety of psychological disorders. And the introduction of this book does indeed feel that way. But what was surprising, was the number of specific cases that Dr. Gnaulati discusses in his book. In chapter 8 he discusses a boy whom he called William, and who had been classified with Autism. Dr. Gnaulati convincingly explains the difference between a clinical case of Autism and a introverted, assertive, smart boy which is what William turns out to be. By grounding his explanation in a specific experience, he puts us inside his mind and teaches how to think about these issues.

A must read for every teacher, pediatrician and parent--particularly regarding boys

This book addresses commonsense approaches to typical boyhood behaviors. Interesting and informative on every page!

For both professionals and parents

If you could sum up Back to Normal in three words, what would they be?

Kugler does a very nice job at integrating both cognitive and behavioral psychology into understanding the diagnoses ( and over diagnoses) of all of these disorders. It brought to light some areas that I should be investigating further as a psychologist and reframed some some ideas in ways that are applicable to practice.

Have you listened to any of Matthew Kugler’s other performances before? How does this one compare?

No, but this one was great.

What insight do you think you’ll apply from Back to Normal?

Especially in regard to ADHD, I will be thinking more deeply about antecedent behaviors and spending more time investigating parent/teacher complaints.

While this book speaks to the professional, Kugler does a nice job at avoiding jargon and explaining it when he does. He also speaks to the parent and makes them aware of the pitfalls in the mental health field. Kugler uses good research to support many of his views.

What disappointed you about Back to Normal?

If all it takes to overcome autism is to laugh at poo jokes and make brief eye contact, then my son and millions others are cured. This seems like it caters to parents that want an excuse to keep their kid "normal".

I loved this very helpful and insightful look at ordinary childhood problems. It help my thinking about my children

Every parent, doctor, teacher, therapist, and caregiver needs to read this book. It’s so easy for people, especially those in specialized professions, to get stuck in narrow ways of thinking and to get sucked into marketing ploys that targets their specific profession. We do our children and our future a great injustice when we do not take a step back and take a well-rounded look at statistics, psychology, and basic child development.

Great for any parent to read!

This was very informative and I would recommend any parent or educator to read to be more informed on ADHD or other behaviors.

The book is an easy listen, has many very interesting points with lots of references. Definitely a recommended read.

I loved the book! The author seems to fully understand all human behavior and gives expert advice on successful parenting an introvert thinker