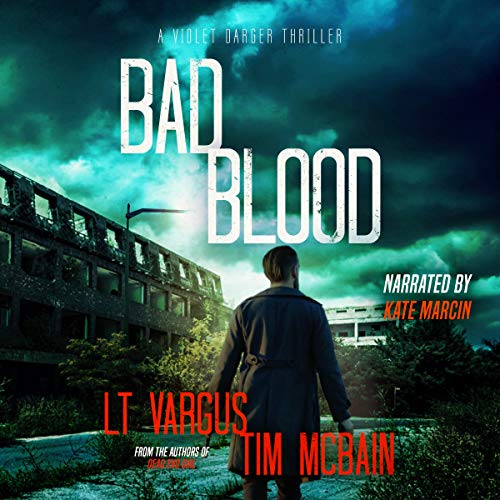 The body slumps over the steering wheel. Pools of blood going tacky on the dash. Two shots to the back of the head. A mafia-style hit in a small town.

Special Agent Violet Darger must make sense of this savagery - figure out how brutality like this could happen in rural Michigan.

The victim had been living the American dream. A small-business owner who built a construction empire. Started a family. Coached youth hockey. He seemed to have it all.

But his surface life didn’t tell the full story. He carried dark secrets to the grave. Left clues which offer more questions than answers, clues that seem to lead Darger to Detroit.

In the city, she finds despair. Corruption. Decay. Blocks of vacant buildings line the streets. Crumbling. Caving in. It resembles ancient ruins more than a modern American city. Concrete caverns waiting to be explored. And there, among the rubble, she gets swept up in the hunt for a notorious hit man.

He kills for profit. Navigates the brutal world of organized crime. Harbors secrets of his own, albeit domestic ones. He holds the answers to all of Darger’s questions, but only if she can catch him.

This pulse-pounding thriller will have you on the edge of your seat until the final page. Fans of John Sandford, Karin Slaughter, Harlan Coben, and Lisa Jackson should check out the Violet Darger series.

The books in the series can be listened to in any order, so grab Bad Blood and get started today.

Decent plot, but the authors over-use certain words and phrases throughout the series, which I found annoying. The protagonist isn't very likeable across the series. The performance is OK, except for some mispronounced words and names

the story is engaging, the characters likeable, but it is irritating how much the main character is constantly such a lone wolf, breaking protocol when it isn't necessary for the story, and ends up causing the death of a coworker and usually injury to herself. it isn't necessary and with a few small changes the stories would be just as good and far less irritating. a strong female character can be just as strong when playing by the rules.

I have read the previous books and was totally disappointed by this one. Agent Darger has been an annoying character who draws no sympathy from the reader, rather just a disinterest. This ended the Agent VD saga for me.

I do not recommend

This book is terrible. The writing was good the gore A plus but the plot was so unbelievable. Darger the MC I hate, Loshack was growing on me but then he sucked too, Lucke I liked in book 1 and hated in this book, too political in this book and it was done so wrong. Nothing involving investigating skills was done right, the FBI in this book was worse than the local police department in terms of investigation and operations, and everything was so wrong. Darger can’t keep a gun to save her life and literally she hasn’t . She’s been shot (multiple times), hit (multiple times), drugged, stabbed, handcuffed, abducted, she’s been in a violent car crash, and the only thing missing was being burned but she managed to burn a shed but she never dies. She caused so many people to die and she never got reprimanded or written up. Owen her boyfriend she left for the FBI and now she kind of sort of left the FBI. I don’t know at this point. I’m not reading any more of these Darger books anymore. The series instead of improving got worse. This is laughable. I’m done. I don’t recommend this series at all unless you want to be disappointed.

I’m really enjoying all the Violet Darger books. Well read and written. Not sure about next one tho. Sounds like others.

I am not sure how I feel about this one. This is the first book in the series that has me questioning if Violet is going to grow as an FBI agent or a person for that matter. The story has enough intrigue but I had a hard time with the line wolf attitude that has been a continuing habit of one Special Agent Darger. However, that being said I do like the fact that Violet follows her gut. That is why I don’t know how I feel about one. The narrator has done an outstanding job in all of theses books.

The mob families set in Detroit

Great book , as usual by Tim McCain . I always love Darger . Always understands just what to do . The best part is in the last couple of chapters . Completely surprised me . A really good read or listen ! Narration by Kate Marcin was excellent. Can't wait to get to the next book !

THIS REVIEW IS FOR BOTH THE AUDIOBOOK AND EBOOK VERSIONS
Again great work from this narrator as well as the author. All the characters are interesting and for a mafia story it's great well written and graphic. I wasn't expecting some of the content but it was a great experience. I recommend it!

these books are becoming too unrealistic.i really enjoyed the first few but every one is darger physically getting into a it with a killer and the killer dying. it'd be great if one got arrested just once. I'm probably done with the series after this one.

This character is sorely lacking in so many skills. That she's an FBI agent is scary on its own let alone this is fiction. I enjoy books with strong, smart female leads - Violet is sorely lacking in the smarts department. I'm done with this series and maybe the best thing is for Violet to find a new job. While she was gathering information she was not able to trust anyone more than herself and unfortunately an innocent was killed and the outcome could have been much better if she'd communicated with people she trusted. Oh well - no more Darger for me.