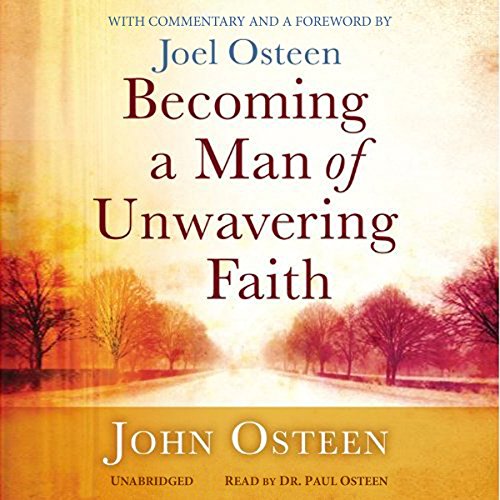 Becoming a Man of Unwavering Faith

During the course of his 60-year ministry, John Osteen combined an extraordinary love for people with a vision for ministry best described in his own words: "No limits". This volume not only includes content from John's sermon transcripts, but also a foreword and commentary written by his son, Joel. The principles of this "no limits" faith here come alive again for a new generation.

For the moments of struggle and temptation that every man faces, and the times in life when he feels surrounded and under attack, John's message is profoundly simple - those moments are precisely the time for an unwavering faith.

In this book, John schools today's believers in seven qualities of unwavering faith:

Osteen also provides principles for those times when faith doesn't seem to be working. Becoming a Man of Unwavering Faith is a guidebook to stronger faith, from a man who spent a lifetime testing its limits.

Get the book, will no doubt strengthen you’re faith! Inspirational throughout, a must add to the library

Inspiring as only an Osteen can do

The Osteen family can inspire like no other. This book goes back as to how they became true messengers of God. It all started with Father John. Son Paul tells the story from when John was a rebellious teen all the way through his forming of megachurch Lakewood Church and beyond. This is not a history book, but a book of how to become what God intends us to be through the eyes and journeys of John Osteen. A book for anyone who loves the Lord and wants to serve to best of their ability.

Audible has done it again as Usual

Where does Becoming a Man of Unwavering Faith rank among all the audiobooks you???ve listened to so far?

I got this book to have my Fianc?? listen and he was very impressed. The thing that makes this important to me is that he is not easily impressed. This is invaluable for me.

What other book might you compare Becoming a Man of Unwavering Faith to and why?

Get out of the Pit

What does Paul Osteen bring to the story that you wouldn???t experience if you just read the book?

How simple it made one understand how you could reach that point of unwavering faith.
I did not see this as a performance, however, more so instructions for living in a manner that one feels compelled to exercise faith in every situation and almost anticipate the next adventure so you could see God work another miracle.


Was there a moment in the book that particularly moved you?

did not see this as a performance, however, more so instructions for living in a manner that one feels compelled to exercise faith in every situation and almost anticipate the next adventure so you could see God work another miracle.

I want to thank Audible for being there I have eye problems and this system you have developed and perfected enables me to continue to read and stimulate my mind by a continued process of learning into my older years.

I actually bought this book, because I wasn't paying attention, and thought it was Joel Osteen - turns out this is Joel's father. Joel gives a summary at the end of each chapter - if you're a regular listener of Joel, you'll appreciate the background of his father's life, and see how the Lord has blessed John, and Joel as the result of his faithfulness.

A great listen, and gives you insight into how Joel became who he is today.

This book displayed what the late John Osteen had to go through to be a man of unwavering faith, and displays as long as Jesus is the center of all men lives we can accept our authority on earth that God, Jesus and the Holy Spirit gave us.

Highly recommend it to all men!

Great message of faith, hope, and love, that helps us remain focused on our Father in Heaven and his Son, Christ Jesus.

I listen over and over again

I've listened to this 15 or 20 times. it's that captivating and practical. John Osteen is just as great as Joel.

I found this book very rewarding, it caused the faith of God in me to soar to new heights.
The healing testimonies was a great testament that I share with others I know dealing with various afflictions.

A must read for everyone who has been struggling!

Loved it! Again this is a must read. Thank GOD for John Osteen and the Osteen family!

This is worth hearing again and again. By hearing John's life story, you can understand how faith can grow in the midst of trials.