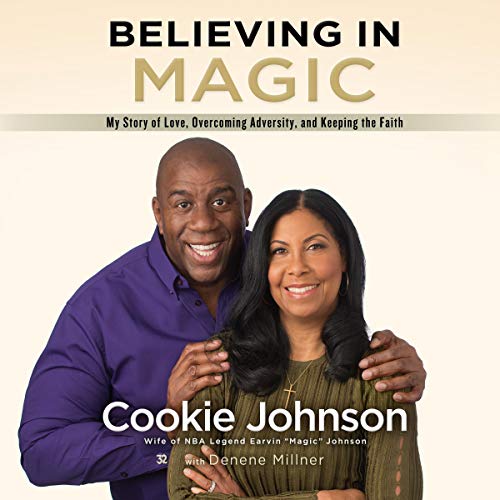 In her poignant and touching memoir, Cookie Johnson, wife of NBA icon Earvin "Magic" Johnson, shares for the first time how her husband's HIV diagnosis twenty-five years ago sent her life and marriage in a frightening new direction.

On November 7, 1991, basketball legend Magic Johnson stunned the world with the news that he was HIV-positive. For the millions who tuned in as he shared his news, Magic's revelation became a seminal moment for the nation. Now twenty-five years later, Cookie Johnson shares her story and the emotional journey that started on that day - from life as a pregnant and joyous newlywed to one filled with the fear that her husband would die, she and her baby would, too, be infected with the virus, and their family would be shunned. Believing in Magic is far more than Cookie's account of surviving that trauma; it is the story of her marriage with Earvin and the nearly three decades of loving each other, losing their way, and eventually finding a path they never imagined they'd take.

Not the inspiration story

I got through a few chapters, but could not go on reading after Magic Johnson suddenly showed up with a kid, unannounced. I wanted to puke!! physically i can not force myself to continue listening to this story of abuse and torture. What, your boyfriend suddenly showing up with a son unannounced actually gives her confidence that he will be a good father later down the road? I can not wrap my head around this logic!!

didnt love it. seemed like she let him run all over her for her entire life. it was kind of like listening to a girlfriend in the worst most destructive relationship ever.

I really enjoyed this book! It reminded me that we all have a journey, and just because it doesn't fit within a traditional mode doesn't mean that good isn't in it. Well done, Cookie!

Good story about relationships, love and resilience! it was also a wonderful illustration of how families stick together no matter what.

Magic was truly a handful. I'm glad he changed for himself her and kids. Great story.

Very encouraging testament of trials and triumphs!! Very inspiring and great heart.
From family, to marriage, to personal growth. I really enjoyed this book.

I've always wondered how Cookie & Irvine stayed together & finally, we get to know. I loved reading this book & how honest she was in sharing their story. I highly recommend reading it - it's an inspiration to us all!

This story reminds readers that athletes and stars are normal people too. Her story at times reminded me of myself then others times I wondered why bother with Magic, he was too fickle for me, but then again, the life style and who he was, I guess I understand why she stayed. Her story is interesting enough to keep you engaged.

What a great story!! Very transparent and real. She discussed the topics many stray away from.