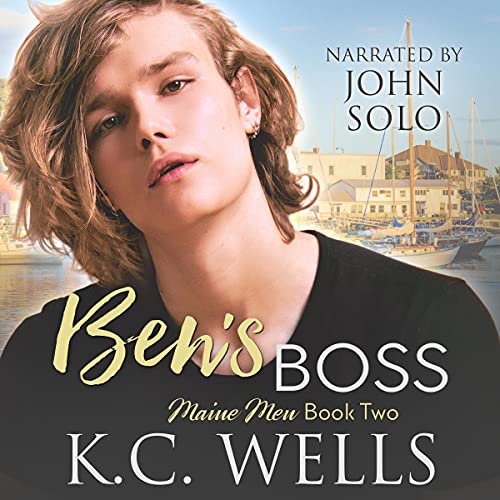 “God wouldn’t be that cruel.”

Except the boy Ben remembers has grown into one seriously hot, brooding man. In another life, Ben would have climbed him like a tree. Wade’s gaze still makes Ben shiver - although now for entirely different reasons.

As soon as Wade read Ben’s application, he knew he had to see him. Ben’s still as gorgeous as Wade remembers. It’s obvious he doesn’t expect to get the job, given their history.

But Wade has an agenda. He has to make it up to Ben for treating him so badly - not that Ben will ever know why he acted like he did. Seeing him every day only heightens Wade’s regret. If he’d had more courage back then, maybe he and Ben could have been something.

The least he can do is show Ben he’s changed.

There’s no way Wade can get what he really wants - Ben’s heart.

Really enjoyed this new one from KC Wells! I adore second chance novels and this was a great example of that trope! I loved the main characters in this one and their story was excellent. John Solo does a nice job narrating, as usual!

When Ben decides to try for a change of pace and a new job, he never expected to see someone from his past, someone he always dreamed about but should not have. How do you react when you see your high school bully when you go in for your job interview? Ben is more than surprised but he is not going to show any fear and let Wade win. Little does he know that Wade has changed and had reasons for what he did. Wade is determined to try to make up for his past actions and neither man has any idea on what will happen next.

Ben and Wade’s story is a sweet and emotional one. Wade has hidden in the closet for years. When Ben returns into his life he cannot hide anymore. I really enjoyed the way the two men develop a tentative friendship that soon blossoms into so much more. Wade may have had reasons for doing what he did in the past, but it does not make it right but seeing Ben’s reaction and emotions on the whole experience- past and present makes for a beautiful story. Narrator John Solo does a good job of bringing out the emotions in this story and pulled me in to the story right from the start.

John Solo always gives a solid performance and this was no exception. He is good at emoting and does a decent job in varying his tone to give distinct voices to the main characters.

I enjoyed the first story of this series with it's age gap romance. At the end of book one there was a teaser for Ben's story. Ben was applying for a job at a store whose owners had the same last name as a high school bully that was awful to Ben. Ben was hoping that there was no relation, but at the same time there was a part of him who remembered how attracted he had been to that same bully.

A short time later, Ben interviews for the job with that bully. Wade remembers Ben when he sees him and he looks back with shame. Though Ben is qualified and the best candidate to interview, Wade partially hires him to make up for bad behavior. Though his solution to ignore Ben instead of apologizing leaves a lot to be desired.

Of course, close proximity and Wade's wonderfully sweet and somewhat interfering family change up the dynamics between Ben and Wade. I really loved Wade's family and Ben's friend group that it seems this series will be based on. I thought it was well told and Wade was able to finally acknowledge his mistakes and prove to be a fitting partner for Ben, so I was happy with the ending.

You can't undo the past but you can make a new start as the people you are now. This is part of the theme and message of this book. We also get glimpses of other that are having changes in their lives or are looking at new ways to see themselves. This book show a lot of growth in both of the main characters. Sometimes fear of what might happen can be the worst part. I was glad to see these two finally open up and communicate with each other.

I listened to the audio version which was well done and very enjoyable.

I absolutely love listening to this second chance at love story. Ben and Wade's story is so beautiful. This a slow burn which is prefect since these two had a lot to move past. I absolutely love how KC Wells does this redemption story. Then John Solo does an amazing job with this narration. I just couldn't stop listening. brings so much life to this story. Such a beautiful listen!

Ben’s Boss by K.C. Wells was given to me in exchange for an honest review. Ben was bullied in high school and his new boss was the bully and his first crush. Ben is not sure he can forgive him or stop crushing on him. Wade knew he was a horrible person in high school and wishes to make amends. I loved Ben and Wade’s story. It shows learning from your mistakes and showing others that you have changed deserves a 2nd chance from the one you love was hard fought and worth it. John Solo continues his wonderful narration from the first book to Ben & Wade. I love his gravelly voice for Wade. It was perfect for the image I have in my head.

I like this audio so much! Ben and Wade story is a second chance at love romance. Ben and Wade were classmates in high school, Ben was being bullied by Wade and that made Ben’s life a living hell.
But now at 26y/o Ben still carries crush on him. Ben applied to a job that he was sure he would love, oh surprise when he discover that is Wade’s family who owns the gift shop, Ben is afraid of no getting the job but after the interview he get it.
We learned the history between them and I love that we get both POV’s this gives us a better perspective of the story, their feelings, the truth behind the bullying, the secrets Wade carries and the forgiveness, I love the story and how is written, Ben and Wade were meant to find each other again and be together. This was truly romantic and sweet! John Solo did a great job narrating this book, I like Ben and Wade voices! I highly recommend it!

Oh wow I really loved this. I honestly wasn't sure how I'd feel as the bully redemption story is usually a tough pill for me to swallow and find believable, but that was not the case here. KC Wells took the time needed to make this very realistic and very believable, the entire story just felt so naturally organic. I adored Wade's mother and grandfather from the first moment we met them, they were simply wonderful. I just loved the group of friends the author has created in this series. They are all their for each other whenever needed, they are honest with each other, don't sugar coat things, and have each others backs. Some of my favorite conversations in the book were between Ben and some of his friends, they felt very natural and realistic to me.
This was a VERY slow burn between Wade and Ben and it needed to be. They needed time to get through the past, forgive, and move on. It was handled perfectly. Their first kiss was just about the sweetest first kiss ever! Wade has been in the closet his whole life so he got to experience all his firsts with Ben. Even their time in the bedroom felt so realistic--it was sweet and steamy all at once and I loved them!
I am doing this series on audio and John Solo has been great. He brought a lot of emotion, tenderness, and feeling to the story. There are a lot of voices that appear often so there was a little overlap, but nothing that was too hard to follow. My favorite thing about this narrator is the inflection he brings, the pacing, and the easy style with which he tells a story. Cannot wait for Seb's book next!

A beautiful and intense love story with a difficult theme of bullying and how it impacts kids, teenagers and adults who were bullied as well as who bullied others 🥺
And about how unexpected attraction and support from loyal friends and loving family members can help boost ones love life and get a boyfriend 😉
A masterpiece from K.C. Wells who can incredibly well blend together romance, sexiness and difficult topics with spot-on narration by John Solo 🤩👍