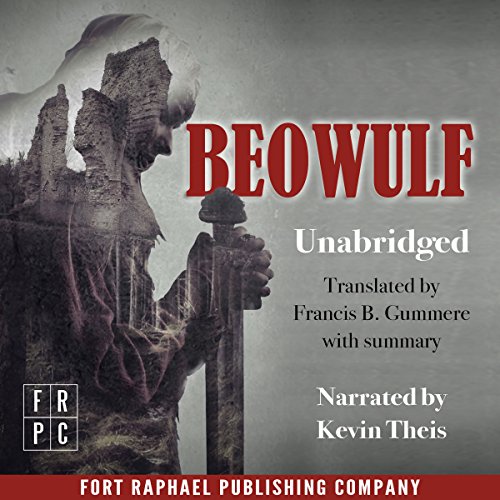 "Beowulf", a sprawling, fantastical tale of bravery, heroism, and Anglo-Saxon heraldry, is the most celebrated epic poem in the English language.

The story of the great Geatish fighter Beowulf, who comes to the aid of the beleagued Hrothgar and his men, the poem relates three epic battles: Beowulf's fight with the monster Grendel, his face-off with Grendel's vengeful mother and, after serving as King for 50 years, Beowulf's fateful clash with a fire-breathing dragon.

Francis B. Gummere's translation of this ancient text has been hailed for over a century and is here brought back to life with a summary of the poem by the English scholar Dr. J.L. Hall.

Sweeps you into the story

Stirring, sturdy reading that sweeps you into the story. Music and sound effects provide effective punctuation. I listened in one sitting, while driving a notoriously bland stretch of road, and it made the miles zip by. Very entertaining—and I would recommend this version for students working with the poem, as well.

Enjoyed the epic story rendered in an epic voice. Theis is becoming one of my favorites.

Ok. So I was an English major and had to read this. I got the story and appreciated it, but I hated slogging through it and just didn't get how it was so pivotal. I'm so glad I took the time to listen to Mr. Theis' narration. He made it sing for me. I get it now! Thank you!!!

A piece of classic literature brought to you by an excellent narrator. Very enjoyable listen.

Way to make it fun

Among the classics I never got to in early life, this one is both the most engaging and the most inexplicable. I have to re-listen here and there to keep the story straight. Probably would never have made it through in print. This reading is clear and the narrator has a beautiful voice. The occasional sound effect and background music are a real bonus, making it fun, keeping you in it.

Kevin Theis does a great job bringing this epic tale to life. This version is proof that Beowulf was meant to be heard, not read.

Incredibly engaging, moves at a clip, and really fascinating. Glad to revisit this story again!

Rating for production rather than the story because it's Beowulf. Love or hate it, read it because you want to or it's assigned: you know what you're getting anyway. :) This is a great version. Excellent narration, good quality production. (I got free codes from the narrator for this, and am voluntarily leaving a review)

My mistake: always listen to a sample. An old-fashioned "lofty" translation read in a gratingly old-fashioned declamatory style. Nerve-jangling.

Well done story of heroism and death. Terrifying monster described in detail and exciting to the end.