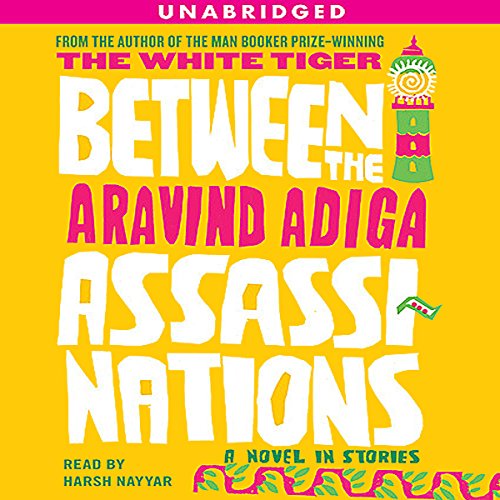 Welcome to Kittur, India. Of its 193,432 residents, only 89 declare themselves to be without religion or caste. And if the characters in Between the Assassinations are any indication, Kittur is an extraordinary crossroads of the brightest minds and the poorest morals, the up-and-coming and the downtrodden, and of an India that modern literature has rarely addressed.

A twelve-year-old boy named Ziauddin, a gofer at a tea shop near the railway station, is enticed into wrongdoing because a fair-skinned stranger treats him with dignity and warmth. George D'Souza, a mosquito-repellent sprayer, elevates himself to gardener and then chauffeur to the lovely, young Mrs. Gomes, and then loses it all when he attempts to be something more. A little girl's first act of love for her father is to beg on the street for money to support his drug habit. A privileged schoolboy sets off an explosive in a Jesuit-school classroom in protest against casteism. And the loneliest member of the Marxist-Maoist Party of India falls in love with the one young woman, in the poorest part of town, whom he cannot afford to wed.

A blinding, brilliant, and brave mosaic of Indian life as it is lived in a place called Kittur, Between the Assassinations, with all the humor, sympathy, and unflinching candor of The White Tiger, showcases the most beloved aspects of Aravind Adiga's writing to brilliant effect and enlarges our understanding of the world we live in today.

"As a portrait of India, it's far richer and more nuanced [than The White Tiger], encompassing the perspectives of Muslims, Hindus and Christians; rich and poor; young and old; upper caste and lower. ... Indians may not always like what Adiga has to say, but their future depends on his freedom to keep saying it." ( Newsweek)
"With richly detailed descriptions of life in Kittur, from the cart puller to the journalist to the scion of the town's richest man, Adiga achieves in a dozen pages what many novels fail to do in hundreds: convincingly render individual desire, disappointment and survival. ... In many ways, the vignettes in Between the Assassinations flesh out the question at the heart of The White Tiger: Where is the justice in one man ruling another simply though the accident of his birth? ( San Francisco Chronicle)
"The hearts of his characters are where Adiga reveals the greatest depth and breadth, spanning the ages from youth to late maturity. ... Adiga creates these, and other distinctive characters, with the ease of a god, and deftly tells their sometimes comical, often tragic stories against the backdrop of an often corrupt, and sometimes lovely South Asian world." ( Dallas Morning News)

This is an important book by an important author who has already won a Booker prize. It captures the rich complexity of India on every level possible; no easy task. Adiga casts a keen eye towards social, political and economic injustices without a heavy hand. Rather, he creates a a deeply textured protagonist whose life tells us all we need to know about these larger issues from a personal and intimate viewpoint.

The success of this unabridged audio version is clearly the talent and skill of the narrator, Mr. Harsh Nayyar. Mr. Nayyar 's timing is always perfect, his voice captivating, his pronunciation perfect. He draws us into the story immediately, before we even become invested in the main character. He transforms the reading of audio books to the level of sheer art.

This is a collection of short stories, not a novel with a single story line. Some of the negative reviewers seem unable to get over that point. Despite no plot line, the stories are linked together by place -- all are set in the fictional southwestern Indian town of Kittur. In this sense it's not unlike Dubliners or Winesburg, Ohio.

Aravind Adiga does an excellent job of creating believable and endearing, though not necessarily likeable, characters that represent a cross section of Indian society.

My only complaint is that it is unrelentingly grim, which again reminded me of Winesburg, Ohio. Nevertheless, I recommend it, especially to anyone interested in modern India.

Enjoyed these thoughtful stories very much, and particularly liked having a narrator with an appropriate accent, very clear to understand and hear, and read extremely well. I would recommend this book to anyone with an interest in compelling stories.

I downloaded this book since I enjoyed the authors previous book,White Tiger. This book is nothing like the first one. Extremely boring vingettes that take place in an obscure Indian village. A real torture to finish it.

Enough with the Indian Poor Already

This an aggregation of short stories about individuals struggling to survive in the Indian caste system. Mildly interesting but after "White Tiger" and "Sliumdog..." I have pretty much had it with descriptions of the underbelly of India. There are parts that are very funny; mostly because of the cursing and berating one another, but it is a generally depressing read. The reader becomes wearing and annoying too. Maybe that's the message but it's not a page turner. I bought it because of the $9.95 Audible promotion. I don't recommend it as either entertainment or information.

Compelling, but not pretty

I enjoyed the performance and the stories were compelling--AND they held together. However, the subject matter was hard to listen to. The poverty and the hatred--both toward self and others who are different was hard to hear.

The stories in this book appear to be well-writtten, realistic visions of the problems faced by lower caste people in India. While the images are convincing, the stories are uniformly morbid and difficult. Men and women alike are frustrated, sometimes corrupt, always in trouble. It is not a pleasure to listen to.

I had to force myself to finish this

Unless you have an interest or knowledge of the history of India, don't bother wasting a credit or your time. This was not entertaining. It was very raw and unpleasant (this, from someone for whom the F-Bomb is a part of life!). I listen to several books per week. It took me two weeks to struggle through this. I saw little point in the book and have no idea what appealed to me when I chose it. Don't make the same mistake. No stars is the harshest I have ever been.

Why Did I Buy This Book?

I can't listen to this book without going to sleep. This assembly of short stories doesn't interest me. I just can't get interested in Indian culture. Next time I will pay more attention to descriptions and reviews.

I am almost halfway through part two and I don't see a theme or a storyline.