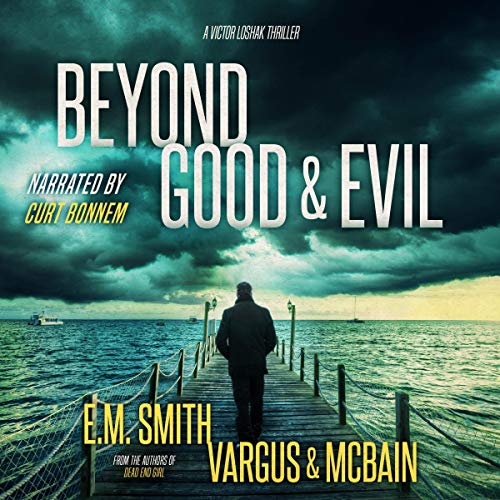 He slips through the unlocked window. Creeps down the hall. A shadow standing in the bedroom doorway. Will you wake when death comes ripping?

A string of brutal home invasion murders terrifies Dade County, Florida. The killer strikes in the dead of the night, savages innocent people in their beds, wipes out entire families.

He attacks at random. Rich. Poor. Young. Old. No one is safe.

When the city sleeps, he comes alive. Stalks the night. Walks among us.

The investigation is hopeless. There's little physical evidence to work with, and the killer's chaotic behavior makes him as unpredictable as he is dangerous.

What drives someone to such violence? And how can anyone make sense of such brutality?

The task force leading the investigation needs a profiler, and there's only one man for the job.

The 53-year-old likes his Dunkin' Donuts coffee shaken, not stirred. And now, for the first time, he's on his own.

But how far will this case push him?

In recent years, Loshak has slowed down some. He relies on more wit than grit these days, often playing a mentor role to his partner, Violet Darger. Until now, she always had more than enough grit for both of them.

But Darger isn't around this time, and a killer this aggressive will push Loshak to his limits.

This pulse-pounding thriller will have you holding your breath until the final chapter. Fans of John Sandford, Karin Slaughter, Michael Connelly, and Lisa Gardner should check out the Victor Loshak series.

This book is actually two stories, along with Beyond Good & Evil, it includes the novella, The Good Life Crisis.
Beyond Good & Evil provides insight into Loshak’s life as well as his abilities to find the serial killer he has profiled. While Loshak is normally teamed up with Violet Darger, this story doesn’t suffer from her absence, in fact it was very interesting to gain more insight into Loshak.

The Good Life Crisis follows Loshak as he helps his ex-wife settle in Santa Fe, a chance meeting during a visit to a Santa Fe art gallery turns into a mystery to be solved. This story proves that he has a very human side along with his excellent detective skills.

Curt Bonnem does an excellent job bringing these stories to life, I’m looking forward to listening to more stories narrated by Curt. If you are a fan of the Violet Darger series by L.T. Vargas & Tim McBain, this set of Victor Loshak stories is a must listen!

I loved it. I love everything this duo writes. My biggest takeaways from this book were:
a. I need to finish the Darger series, because I feel like I missed some stuff.
and...
b. I really need to find a gourmet hotdog restaurant, because I want a mac and cheese covered hot dog.

aside from all that, I enjoyed the writing, as always, and the narrator, who did an awesome job.

All these great reviews for a book that is...

boring. I expected a lot more from this book. Seeing the reviews, I was excited to step back into fiction books but this was not the direction I expected it to be. A pretty boring story with little character build-up. Yes we find out the poor little killer felt like a little guy who wanted to be king over everything because of his obvious abuse as a child. A better ending could of made it much better. Wow.. they caught him and shot him. The end.. thanks for reading. I would pass on this one. The narrator was pretty good overall though.

Side note. I expected the stealing of silverware to have a much better payoff than just selling it for drugs. :P

Victor Loshak, Book 1 was all that I hoped for and more!
Curt Bonnem, the narrator, did a wonderful job making Loshak come to life and giving him a voice! He's a good fit for this character!
This book was absolutely AMAZING! We got to "know" Loshak with Violet Darger as his partner, but now that he's alone, we get to see his complexity. His life. His ex-wife. His daughter. His feelings on aging. The Author's did a great job on making him his own. In Beyond Good & Evil, he was "partnered up, " with "The Reporter," aka Spinks. He was great as well!
Loshak & Spinks together was fun! They are super funny and get along great! :) I can't wait to hear what's next in the world of Loshak!

The storyline is so dull that it was the equivalent of watching paint dry. I have more interesting stories from trips to the grocery store. I couldn't even finish it.

Loved this! Excellent story, writing and fabulous narration. Highly recommend and can’t wait for the next one.

An FBI agent who solves a crime with a reporter.

what a stupid premise. And the character spends half the book ruminating how old and useless he is...in his 50s. Depressing and a ridiculous premise. Sorry I used a credit on this.

This is an ok book. The storyline is great. I would only recommend this book if you can stomach the in depth description and brutality of children getting attacked and/or killed. I'm pretty good at it and it was extremely tough for me to get through it. Omg it was just awful.... the killing and hurting of children.

I stepped away from the Darger series because it had become too ridiculous even for nonfiction crime novels. Unfortunately, this is not much better. Extremely violent descriptions of the crimes while droning on and on about the killer's thoughts and past. All really going nowhere in regards to the story's outcome. Again, didn't read other series to most current book but really makes Loshak out to be someone very different than other books. Practically incompetent which was weird. Incompetent yet somehow no accountability for it and remains a "heroic" character. Felt like the authors were trying to cram in "who IS Agent Loshak" and "oh, we need a whacko killer too" just to have a book. Overall an odd story. The lead in to the next one in the series sounded more promising. Fingers crossed.

Emotionally difficult in some spots

I enjoyed the book, however, I find it very upsetting when injuring a child is involved. Perhaps this is my fault because I didn’t read the entire description. I honestly wish there was a warning.