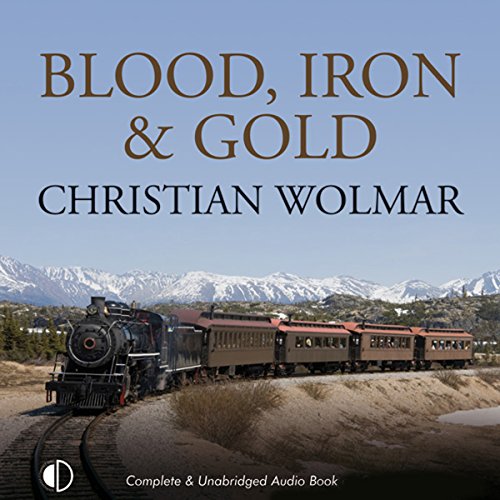 Blood, Iron, and Gold reveals the huge impact of the railways as they spread rapidly across the world, linking cities that had hitherto been isolated, stimulating both economic growth and social change on an unprecedented scale. From Panama to the Punjab, Christian Wolmar describes the vision and determination of the pioneers who developed railways that would one day span continents, as well as the labour of the navvies who built this global network.

Wolmar shows how cultures were enriched – and destroyed – by the unrelenting construction and how they had a vital role in civil conflict, as well as in two world wars. Indeed, the global expansion of the railways was key to the spread of modernity and the making of the modern world.

"[A] fascinating study not just of a transportation system, but of the Promethean spirit of the modern age." ( Publishers Weekly)

a mile wide, an inch deep

The author opened the book explaining the limitations of what the book covered. He delivered 100% on the promised limitations. Wolmar provides a good survey of the development of railroads around the world, but too little detail on the specifics.

A gripping and educational history of the growth of railroads worldwide and their future potential.

One listener was very critical of this book, but I liked it enough to also buy and read the ebook as well and on Scribd I have read or listened to the authors books about train in the US, India and Russia. The best take away from all this is wherever trains are placed externalities develop. Business flourishes, real estate prices go up, food can move from one place to another as a result or refrigeration cars and tourism was spawned. The railroad was the catalyst for speeding up travel and the inspiration for the personal motor car, which is parked most of the time, often sits in gridlock and costs the driver significant amounts of money. Another book by this author is The Illustrated History of Railways: Te Iron Road has excellent photos and is highly reccomended. I am not an engineer, but learned The Swiss developed their bridge building and tunneling skills due to the railways. Maybe the other listener was looking for something more technical or specific? That would have baffled me. Instead I developed a keen curiosity to read more from an author that speaks in a language the average guy can learn from. This book also led me to the Navvies and Ghosts of Golden Mountain, which talk about the hard working Chinese and Irish that built the first Transcontinental Railway in the US. The Chinese provided explosives knowledge that enabled the push East of the Transcontinental and they deserve recognition for their diligent effort and accomplishment.