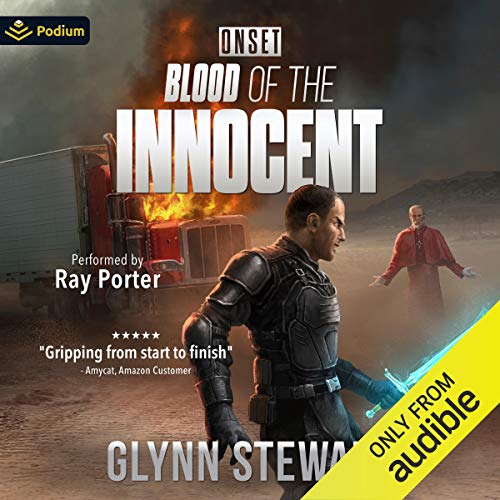 Blood of the Innocent

A war older than the nation. An enemy with agents at every turn. An ancient foe with an offer of peace.

The alliance with the Elfin Warriors has allowed the US government’s supernatural forces, the Omicron Branch, to hold the line against the demons and take the war to the Vampire Familias, defeating them in battle and reclaiming their resources.

Victory against the vampires, however, leaves David White with a moral dilemma as he captures an entire convoy of freshly turned vampires: beyond saving, but innocent of their species’ crimes. Duty only allows one fate for them - but then an ancient vampire arrives to negotiate for their freedom.

Letting them go drags David into the middle of a political nightmare as the Omicron Branch must decide which is more important: Omicron’s authority and revenge for their dead or the very Constitution and people they are sworn to defend.

How do I put this.....
Over all, I found this book sort of dull. Granted you had the ginormous fight scenes with all sorts of super duper magic. But I feel that becomes the problem with some of these stories. To maintain reader interest it becomes too big for itself. The simplest plot lines always makes for an easier more believable story. Not everyone needs to become Luke Skywalker. We are not all out to save the Empire.

Unless your willing to listen about a character (David) who can beat anything without much effort I'd skip this book. David's character was shallow in the first book and didn't improve much in the second book. the 3rd book has David squiring even more power. Challenges which might be interesting and tension filled are very bland.

Perfect for fans of Joe Ledger!! Is there anyone better than Ray Porter?? His voice breathes so much life to these stories!!

Loved this book. Third in series, and shows its really just getting started.
Ray Porter does his usual excellent job narrating.

I can’t wait for the last book of this series to get narrated by Ray Porter which have done such an excellent job on the first three books.

Glynn Stewart fully surprised me with his excellent story telling, surly I’ll follow his next creations.

Full heartedly recommended for all.

This is tied for my favorite book series. It also has my absolute favorite narrator. I tore through this book in about a day and a half. That is about as fast as I can do any audiobook with my work schedule. It had me turning off my favorite TV show just to sit and listen. I can only hope she will turn this into a series similar to BV Larson's Star Force which had 12 books in the series.

Too Preachy and Formulaic

The story goes back and forth between the two. The idea that criminals can spend a lifetime murdering, then they are pardoned so that the war will end is the epitome of politics. Too tropey. The war was too easy. The protagonist has too many superpowers. Might listen to the next one if nothing else is around. Stopped it before the end.

I enjoyed the story immensely I like the narrator the storyline and the characters thank you very much keep up the good work.

Action, adventure, an ending. What more could you want? Tha KS for a solid book, Mr. Stewart.

I am so ready for book 4

I really enjoy this genre of books. Glenn Stewart has taken mythology to a new area. as a lot fan I am fascinated by elfin storyline that he has thrown in. these books are not heavy reading just kind of fun to read.