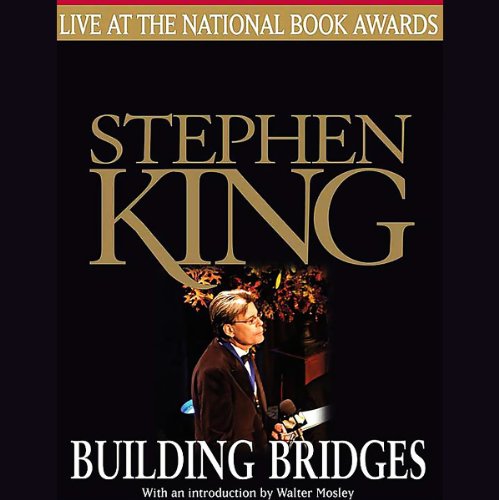 Each autumn, in conjunction with the conferring of The National Book Awards in Fiction, Nonfiction, Poetry, and Young People's Literature, the Board of Directors of the Foundation presents a Medal for Distinguished Contribution to American Letters. The recipient is a person who has enriched our literary heritage over a life of service or a corpus of work. The 2003 recipient of this distinguished award was presented to one of the great voices of American literature, Stephen King.

King accepts the award with grace and wit. His acceptance speech is filled with loving thanks to his wife Tabitha and with a passionate appreciation of his craft. King reflects on bridging the gap between literary and popular writers as well as staying true to his work and to himself over the many years. He concludes his speech by saluting all the nominees and with his sincerest hope that "you'll find something to read that will fill you up as this evening has filled me up".

In Defense of a Good Story

I just saw a piece by a 30-something blogger describing her 10 must-reads. With the exception of Anton Chekhov, I'd never heard of a single writer. Her friends have, though, because she buys books and literally (pun intended) forces them to read them. The Chekhov work she mentioned? He was prolific, and it was one of his lesser known short stories.

In the speech "Building Bridges" (2003) Stephen King points out the hypocrisy of the book snob who refuses to read popular writers like John Grisham, Clive Barker, and, of course, Mr. King himself. That's a willful ignorance of one's own culture, King argues, and nothing to be proud of. I agree and I'll go further: refusing to read a few pages, or listen to a few minutes of a book in a popular genre, is a self imposed book ban.

And let's compare King to Chekhov. King's published a lot more than Chekhov, but to be fair, Chekhov was a physician and he died of tuberculosis at 44. Both men explored different forms of writing, from short stories to novellas to full on novels. Chekhov was a gifted playwright with an eye for social criticism and an ear for dialect in plays like "The Cherry Orchard" (1904). King's written television scripts, like "Kingdom Hospital" (2004) and the truly horrifying-for a-parent "Storm of the Century" (1999). There are so many differences between the two writers, but there's one the literati might find surprising: Chekhov became a writer for the money, and King became a writer out of love.

A Great View Into A Great Writer's Mind.

What made the experience of listening to Building Bridges the most enjoyable?

While not as in depth as "Writing: A Memoir of the Craft" that is my favorite King book, this award speech is a quick and great peek into King's life and writings.

His telling of how his writing has changed his and his family's lives.

His crediting his wife for their success.

"The Man Who Would Be KING".

Had a smile on my face during most of his talk. Stephen’s speech is less than thirty minutes. He talks of literary vs. popular writing. He also talks about his early years writing and his wife Tabitha.