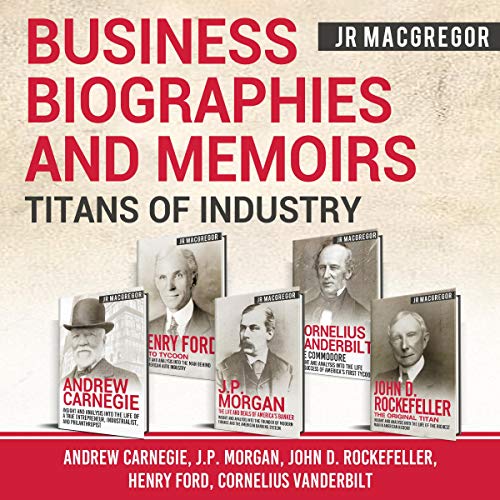 The five Titans of Industry discussed in this series are, without a doubt, the most influential and impactful men in American history. Without any one of them, the entire landscape of the US would be different. They are the founders of the American economy.

We live in a world today that is based on the actions of John D. Rockefeller. Everything we do and how we live are the result of oil and its power.

J.P. Morgan is more than just the name on one of the largest banks in America. He built the financial world we live in today.

Henry Ford not only revolutionized the automobile industry, but the assembly line he created has changed the way the entire world thinks about manufacturing.

Grab a copy, pull up a chair, pour your favorite listening beverage, and dive in to the lives of the men who built America.

Andrew Carnegie amassed wealth that inspired generations of entrepreneurs and industrialists. Starting with nothing in Scotland, he gradually built so much wealth that those at the top of the current Forbes list would still not be able to match him.

He began working at a young age, and the lessons he learned from observing his surroundings gave him the foundational structure that allowed him to build his wealth and etch his name in the minds of generations to come.

J.P. Morgan is more than just the name on one of the largest banks in America. He was a man who altered the course of American finance and the chief financier for the strategic interests of the titans of the day, such as Carnegie and Rockefeller. He also financed new and ingenious technologies developed by Thomas Edison and was a visionary who saw the potential in Nikola Tesla.

His ability was not limited to Wall Street, though, and his reputation was not bound by the shores of America. He touched core industries in his lifetime, from shipping to power to steel and provided the spark that reignited the economic soul of America after the Crash of 1907.

Rockefeller was the quintessential industrialist. He created an industry out of nascent oil and gas start-ups during a time when none existed. He was strategic in his thinking, choosing to enter the refining side of the oil industry instead of the exploring and drilling aspect of it. He started with one refinery, and then quickly bought up more than 90 percent of his competitors in the state within a few short years.

The story of Rockefeller as told in this book provides a deep view of the oil industry and is told from a very human and real perspective. It looks at the events that shaped his life, from the shenanigans of his crooked father to the pleasant and philanthropic old man that he became.

The Ford name is everywhere. It is ingrained in the American way of life. From the way we make our food to the way we think about cars, it all came from the mind of this Irishman from Michigan.

This book covers his life from when his family immigrated to Michigan until his last breath. It recounts a life from the perspective of someone who wants to understand the genius and spirit within everyone.

Cornelius Vanderbilt I had no illusions about his life. He didn’t start out with grand plans and ungodly greed. He merely stepped in this world one foot at a time, one boat at a time, one market at a time - one day at a time. He worked 16 hours a day, seven days a week. He worked hard and played hard. When all was said and done, though, he was a simple man who pushed the world of transportation to be all it could be - to be what it is today.

What I learned from reading about these people is that despite changes in society (laws, technology and attitudes) there is opportunity for everyone, if one is willing to work hard, look at crises as opportunities and to persevere. To get wealth one must be prepared to solve problems for others through goods or services despite the obstacles involved. A good audio book with good narration.

This is the 1st book by J.R. MacGregor that I have listen. His books led me to one of his earliest biographies. What they all have in common is a personal picture of Americans who have had a fundamental impact on this nation for good or ill. I wasn't sure how I would feel about a book that dealt with the life of Andrew Carnegie, J.P. Morgan, John D. Rockefeller, Henry Ford, Cornelius Vanderbilt. Mr. J.R. MacGregor points out so well that there is both a good and bad of them who had so much to do with the creation of an Industrial American Economy in the Post Civil War Era. There is the greed of the monopolist who attempted to eliminate competition without regard to the untold harm it could cause to our economic prosperity. Then you see a man who was undoubtedly the wealthiest man in America committed to giving away the wealth he had accumulated to improve the society that had allowed such disparity in wealth. There is a dichotomy here that is very difficult to judge. If we advocate a laissez-faire free market economy, such disparity seems to me is inevitable. In this book I saw both good and evil in this man. J.R. MacGregor helps you to consider what kind of cooperation is necessary in a free democracy.

My husband and I both listen this book

My husband and I both listen this book. We’ve spent our entire lives road tripping and it was fascinating to listen about the start of it all. Warts and all, these men are examined for what they brought to America and what they contributed to these mutual vacations. It is a very listenable account and didn’t gloss over the creature comforts enjoyed and the staff support required.

For me as a women’s history academic, I felt there was a retro “rich white guys” feel to this that rankles a bit. The history genre is replete with books about rich white guys. However this book is so buoyant and well written it deserves a wide audience. It certainly casts an intimate light on some of the captains of American industry.

This book provides insights into Andrew Carnegie, J.P. Morgan, John D. Rockefeller, Henry Ford, Cornelius Vanderbilt character, personality, their ambitions, flaws, faults, and weaknesses as a man and empire builder the way view other books have. It gives us a vivid picture of the contradictions and opposing forces that were at work inside of them and the factors that affected them and drove them to be so relentless and some would say ruthless in their drive for wealth, power.

This book is awesome, interesting, mesmerizing...albeit a little long. A surprisingly interesting account of the life and times of Mr. C. Vanderbilt and others, which I assumed, incorrectly, to be quite boring and burgoise, feeling that he, himself had been "to the manor born" and not realizing that this is a true "rag to riches" story of a self-made, strong, colorful man, hated by many but admired by most. Throughout the book, it is amazing to see the similarities that modern corporations and tycoons of today have with Mr. Vanderbilt, and that he was the one to pioneer them. Essentially, he put in practice much of what today's CEO's use and mimic from him to run their Fortune 500 corporations. I like Mr. Vanderbilt and would have liked him in his time. What he lacked in formal education he certainly made up in intelligence, common sense and business saavy. He brought us Wall Street; he invented the takeovers, the downsizing, the tightening of the belts, the price wars, that companies employ today.

This is the best biography

This is the best biography I have listen to date . You don't have to have a financial background to understand and enjoy this book. Amazingly well written. The subject of the book, J.P. Morgan, was a unique, complex and historically significant person and his complexities and contributions to American society on numerous fronts are beautifully documented in this book.And other Andrew Carnegie, John D. Rockefeller, Henry Ford, Cornelius Vanderbilt i loved them.

Could have been great but all were half-stories

These were great narratives for the rise of these men, but told almost nothing about them at the height of their careers. For example, with Vanderbilt, the author went into good detail of his early life managing ships, but told almost nothing of his railroad empire. With Carnegie and Rockefeller, he had great narratives of their early careers, but very little after they shifted their focus to steel and oil respectively.

For a book dealing with five of the most successful business developers in our history, the author is amazingly trite in his review of the factors influencing the steps taken by the subjects. Almost no insight into financial considerations. In fact, you almost feel like either the author himself is, or his perception that the readers are, incapable of understanding strategic opportunities.

J.R. MacGregor presents a very thoughtful and informative detail of Andrew Carnegie, J.P. Morgan, John D. Rockefeller, Henry Ford, Cornelius Vanderbilt’s role in the rise titans of Industry. John D. Rockefeller early life in Cleveland, to his days New York and Florida, Rockefeller always had a strong sense of his own density and religousity and how he was able to separate his business and faith. The PBS American Experience is based heavily off this book. The book also focuses heavily on how Rockefeller through the help of Rev. Gates creates modern philanthropy, his relationship with his namesake son, and his Jr. redeemed the family name and left his son’s in strong positions to be leaders for the latter half of the 20th Century. I’ve listen the author’s other book .

As some other reviewers mentioned, this deep and complex study of THE titans figure in American financial history lacked insight and a sense of the true impact of Andrew Carnegie, J.P. Morgan, John D. Rockefeller, Henry Ford, Cornelius Vanderbilt's work upon the development of U.S. financial institutions.Their position in U.S. history is, perhaps, unappreciated especially with respect to their role in stabilizing U.S. financial markets during a period when the federal government was incapable or unwilling to face the task.

I have read several biographies by J.R. MacGregor. He researches and writes extraordinarily well. This book is a good example of that.

Rockefeller was a seminal person in our history for his business accomplishments. There are good reasons to criticize him for using his financial power to crush smaller business people. However, there is also much to admire for his brilliance and his willingness to move quickly to take advantage of emerging opportunities