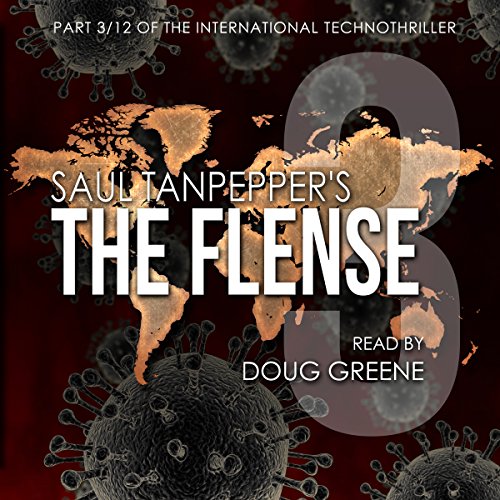 Hundreds die in a fiery train crash in northern China. A cargo ship smuggling refugees is lost to calm seas off the Libyan coast. Entire villages in Ghana are abandoned overnight.

Contracted by an apocalypse prepper group to investigate a series of seemingly disconnected global tragedies, a young medical investigative reporter, Angelique de l'Enfantine, uncovers a disturbing pattern to the tragedies. Are they harbingers of an impending biblical catastrophe? Or practice runs by a fanatical organization bent on global annihilation?

Requiring no more than the slightest skin-to-skin contact, the Flense spread across the globe with ruthless speed and stealth, decimating mankind in days. The infected, ruthless creatures called Wraiths, destroy anyone and anything in their path. Secure inside 10 isolated bunkers are humanity's tattered remains, each working tirelessly to unravel the mystery of the scourge. But the bunkers were never meant to protect forever. In fact, they were never meant to protect at all.

What did you love best about The Flense: China, Book 3?

The detail and the twists in the tales. There are lots of questions to be answered later in the series.

Chung - because he is a mystery.

I received a free copy of this book and I voluntarily left this review.

Girl on the Run

Continuing the suspense, the first &quot;cycle&quot; in this 12-part serial, &quot;China,&quot; completes in this episode. Like life, there are loads of loose ends, but if one reads no further he is not left on the edge of a cliff. The very nature of the story prevents full resolution and leaves your conspiracy sensors on high alert. (Is it really paranoia if some IS trying to kill you?)

I was only able to listen [AUDIO] on the open road as too much concentration was required for traffic (read that either way--you'd best be paying attention to where you are in traffic!) but the excellent narration has been consistent. Don't bother to start here--this is not designed nor intended to be standalone.

Angelique has more pieces to the puzzle including the only survivor from the train, but if Angelique doesn't do something fast the girl won't be a survivor much longer.

Again, Mr. Tanpepper and Mr. Greene have brought this story out front and alive for the listener of this audiobook. It makes you wonder if all of this could really happen in real life right here, right now. Mr. Tanpepper's story makes you think and his story's is filled with all the action and twist and turns of a super roller coaster ride. Mr. Greene brings the book alive with his awesome narration and storytelling abilities, he puts you right there in the middle of the action and everything that is going on and he might even put you in some spots you do not care to go. This serial is so great I can't wait for more, really I can't wait more, really please hurry.

This series is really great. I love the characters, and listened to books 1 through 3 back to back. I need the next one, hurry!!!!!

Good tale with a fascinating proponent

This tale, the third of a twelve part thriller series, finishes Angelique's investigation of a mysterious train wreck in Mongolia. Although it answers many of the questions raised in the first three parts, it opens more new mysteries for each one that it resolves. This work leaves you yearning to read the next part.

The strength of the story is the main character, the investigative reporter, Angelique. Often the main character in such a thriller is almost superhuman, a member of an elite covert operation, backed by a team with incredible resources. No so Angelique, a very human protagonist, often on her own with little but her wits to help her, and sometimes her best guesses are wrong and lead to bad results. She has more in common with Kolchak the Night Stalker, a very human character, a reporter using bluff and wits to solve problems. This is what made the story really interesting. Angelique even suffers from a potentially crippling disability, but it is mental rather than physical. With the help of medication, she keeps this difficulty hidden and under control.

The writing and narration for this part are proficient. While I rate this part with only three stars, please bear in mind that it is only a part of a larger whole. If I were rating parts 1 through 3, I would give it 4 stars, as the larger portion, taken together, is better than any of its parts were individually.