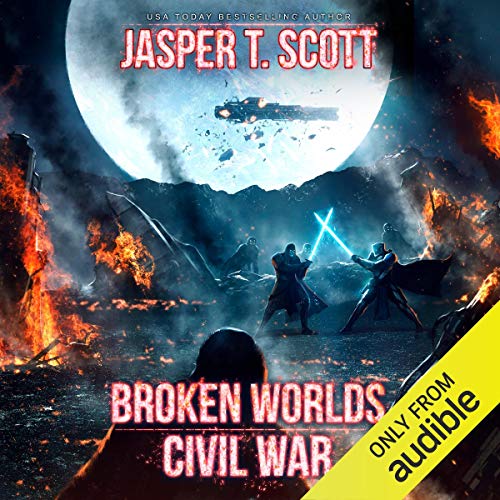 The shocking conclusion of the Broken Worlds series...

The war has begun

Darius vaporized the Cygnian home world to end the war before it began. It didn’t work.

Little does he know, he's been played for a sucker from the start. Terrible as the Cygnians are, there is a more ruthless enemy manipulating the Union to tear itself apart in a bloody war between the Revenants and the Cygnians.

Darius is surging up the ranks in the Revenant fleet, winning victory after victory, but they're all hollow with his daughter, Cassandra, frozen in cryo and no way to safely wake her.

As the war draws to its bloody end, the puppeteers behind the conflict appear and reveal that they also hold the strings to Cassandra's fate. Darius must deal with the Union's real enemy and make a horrific choice: either save his daughter, or save the galaxy.

I have to admit the book would end this way but

I was totally surprised by the ending of the book more death, betrayal and lies from all the characters and the ending took me by shock due so many of the original characters that has to die and whole set of new characters coming on the scene and taking over to try to rebuild what Darius and Tanacus had destroyed and the onslaught of mass murders.
So be ready for suspense and sorry at the same time.

I wish the story over all was better, but it ended at a good length and kept me engaged on my long commutes. Thank you for your off brand Star Wars. I look forward to the next series from Jasper T. Scott

I'll see your holocaust and raise you a pogrom

The final book in the trilogy moves along in a fairly steady pace that culminates in an epic battle. There was another one of the 4 original Revives who sort of got lost in the Helter-Skelter, which was a bit disappointing since their character seemed important until it, obviously wasn't. Finally, the whole, "What happens afterward?" seemed unrealistic and a bit campy.

All said, the series had more positive aspects to it to make it interesting but not one I am likely to re-visit.