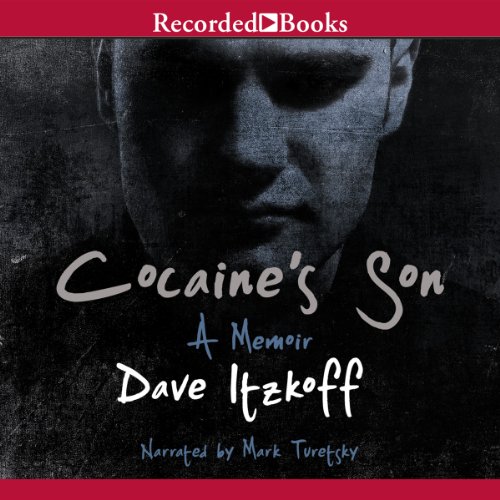 New York Times culture reporter Dave Itzkoff hints at his father’s cocaine abuse in his first memoir, Lads, which chronicles the behind-the-scenes world of working at men’s magazines. In Cocaine’s Son, Itzkoff’s troubled relationship with his father, Gerald, a successful New York fur merchant, is front and center. From Gerald’s long absences when Dave is a child to angry stints in “couples” therapy as they try to repair their relationship, Itzkoff’s story is both harrowing and humorous.

Mark Turetsky's narration is, at first, a bit robotic, but as the memoir unfolds he settles into a style that is reminiscent of Daniel Stern’s voiceovers as “adult Kevin” on The Wonder Years. What really works here is Turetsky's use of voices for the various members of the Itzkoff family, especially Gerald. Turetsky takes Gerald from whiny kvetching to cocaine-fueled rage without ever losing his distinctive New York accent. When Dave receives a desperate phone call from his father, who is coming down hard off a binge in some nameless Manhattan flophouse, Turetsky’s voice is at its most compelling  frightened, staccato, wary.

Once Gerald gets clean and Dave is an adult on the verge of marrying and starting his own family, Cocaine’s Son loses some of its steam. Before his wedding, Dave agrees to accompany Gerald to New Orleans to visit old friends in the fur business. Here, Turetsky’s narration comes alive again as Gerald embarrasses his son by regaling near strangers with tales of his druggy past. "Why do you find it so easy to open up to people you've never met before, but getting you to talk to me is like pulling teeth?" Dave asks in one of the memoir’s highpoints, which gives Turetsky room to imbue Dave with more emotional range and gravitas. But Gerald Itzkoff is the star of Cocaine’s Son and Turetsky inhabits him to perfection. Collin Kelley

New York Times journalist David Itzkoff crafts a powerful, remarkably honest memoir that no listener will ever forget. Growing up, David understood his father to be a trusted ally and confidant—a man who always had some hard-won wisdom to share. But he was also a junkie. As David grew older, he fell into the same trap, until he and his father hit the road in search of their “morning after.” And as they travel across the country and back into memory, in search of clues and revelations, together they discover that there may be more binding them than ever separated them.

Unsparing and heartbreaking, mordantly funny and powerfully felt, Cocaine’s Son clears a place for Dave Itzkoff in the forefront of contemporary memoirists.

Contrary to what its title implies, this memoir does not have all that much to do with substance abuse. It's just a guy and his Dad having some guy talk. Disappointing.