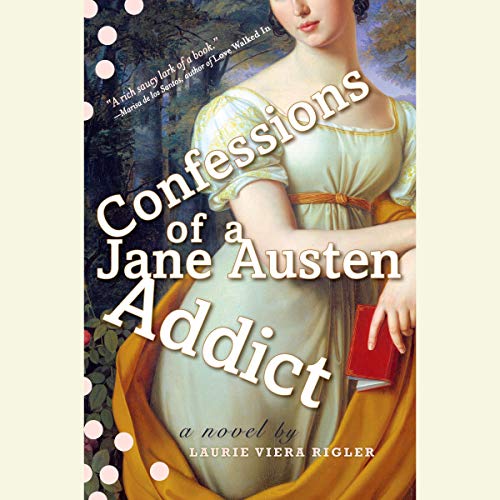 Confessions of a Jane Austen Addict

After nursing a broken engagement with Jane Austen novels and Absolut, Courtney Stone wakes up and finds herself not in her Los Angeles bedroom, or even in her own body, but inside the bedchamber of a woman in Regency England. Who but an Austen addict like herself could concoct such a fantasy?

Not only is Courtney stuck in another woman's life, she is forced to pretend she actually is that woman. And despite knowing nothing about her, she manages to fool even the most astute observer. But not even her love of Jane Austen has prepared Courtney for the chamber pots and filthy coaching inns of 19th-century England, let alone the realities of being a single woman who must fend off suffocating chaperones, condomless seducers, and marriages of convenience. Enter the enigmatic Mr. Edgeworth, who fills Courtney's borrowed brain with confusing memories that are clearly not her own.

Try as she might to control her mind and find a way home, Courtney cannot deny that she is becoming this other woman - and being this other woman is not without its advantages, especially in a looking-glass Austen world. And especially with a suitor who may not turn out to be a familiar species of philanderer after all.

“This frothy take on literary time travel will appeal most to readers well versed in the celebrated author's memorable characters and themes.” (Booklist)

"Confessions is a novel of manners, but with a nifty twist. Laurie Viera Rigler sets the sensibilities of a 21st century LA woman against the manners of Regency England to watch the sparks fly. By turns funny, thoughtful, romantic and suspenseful, this engaging story is as brisk and delightful as ‘taking a turn in the shrubbery’ in the company of a handsome gentleman. If you’ve ever fantasized about being a Jane Austen heroine, this is your book." (Judith Ryan Hendricks, author of Bread Alone)

This one was very well written and contained many entertaining tidbits about life as a young unmarried woman in Jane Austen's England. There's time-travel and enough contrasting detail between modern-day independent women and their Regency counterparts to give the listener food for thought. In addition, the narrator was excellent, using an English accent for "Jane" and an American accent for Courtney, so the listener could not confuse which character's comments were
being spoken.

It only took me a couple of days to finish this one,(normally, I only listen during my work commute, but this one I turned on in the evenings, too, because it was so appealing) and I hope that the author will produce some more.

This is one of the better "Time Travel" books I've listened to over the years. The imagery is good, descriptions of the things you wonder about but are never told about just how things work were a nice surprise.

I would have liked to hear a bit more epilogue, and a bit more about the current time characters than was provided, but all in all, this one is worth listening to.

Sci-Fi Historical Romance - Back to the Future

I like Science Fiction and I love historical romances so this was right up my alley. This book kept my interest and I found it funny and enjoyable. I liked the concept of someone from the future going back to the past and I though the author did a wonderful job using a lot of humor. I look forward to the next book.

This book is absolutely delightful!!!!!!!

This book is captivating, surprising, scrumptious, delicious, wickedly witty--a perfect delight!!! Ok true confession time: I was listening to Cormack McCarthy's "The Road" on Audible Air one hour at a time, and it segue'd into the beginning of this book mid-Road without the "This is Audible" announcement. What kind of book would make me drop The Road like a hot potato and suddenly find myself powerless to resist??! I'm sorry, Cormack!!! but this book is just like someone had dug up Miss Austen and propped her at a writing desk, plied her with hot tea, and promised her a title and the Crown Jewels to work her magic again! It's so fun spotting the parallels between what the heroine Courtney goes through and Austen's works, and then the best part is comparing how a modern, liberated woman would chafe under the rules of living back then. But wait! No! The best part is the scheming mother and the eye-rolling, secretly modern daughter. I can't say I'd share Courtney's love of the peacefulness of not being bothered by cell phones, email, etc. -- because hey, NO AUDIBLE back then ... anyway in case I haven't made it clear I LOVE THIS BOOK!!!

I really enjoyed listening to this book. The narrator adds to the enjoyment with her range of voices and accents. She does the english accent very well. It also has a very austen like plot. It is a nice light "read" which will not tax your brain very much but will pass the time very nicely. Enjoy!!

A very fun confection for any Austen fan. Good narration, and enjoyable storyline. Don't think too hard about the physics of the time-travel involved, and it's a fun and at times even insightful peek into the good and the bad of Regency England, a la Austen.

I really enjoyed this book. I read the other reviews before purchasing it, and had braced myself for some kind of unsatisfying ending. However, I loved the ending. And the beginning. And the middle. I listened to it all in one day, while doing yard work. I've read and listened to all of Jane Austen's books, and as a 21st century working woman, I completely related to the main character, and laughed out loud several times during the book. Five stars from me. I loved it. I'll certainly be listening to it again, as one of my favorites.

If you can start your life over...

This was surprisingly fun. I would have thought Jane, the woman from the regency era would be more of a push over but she isn't. She turns out to have more backbone than Courtney the present day "independant" woman. The romance was OK that wasn't the part I enjoyed the most. It was how Jane starts to take over Courtney's life and actually starts to make it better.

I liked this book better than the first book.

If you're just looking for light reading, with no deeper meaning, this is the book for you. I love Jane Austen and it was fabulous to read a book about a modern woman dropped in that time.

If you're a fan of Jane Austen you've probably imagined what it would be like to live in the world of Lizzy Bennett and Mr Darcy. This book shows exactly that, body odor and all. I listen to audio books in the car and I find myself sitting in the driveway for sometime after getting home because I can't stop listening.