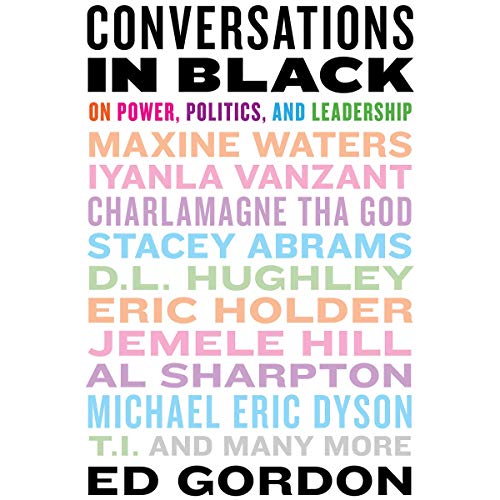 An award-winning journalist envisions the future of leadership, excellence, and prosperity in Black America with this "urgent and pathbreaking" work (Marc Lamont Hill).

Hard-hitting, thought-provoking, and inspiring, Conversations in Black offers sage wisdom for navigating race in a radically divisive America, and, with help from his mighty team of Black intelligentsia, veteran journalist Ed Gordon creates hope and a timeless new narrative on what the future of Black leadership should look like and how we can get there.

Will the Black vote control the 2020 election?

After Obama's presidency, are Black people better off?

Are stereotypical images of people of color changing in Hollywood?

How is "Black Girl Magic" changing the face of black America?

Bombarded with media, music, and social media messages that enforce stereotypes of people of color, Gordon sets out to dispel what Black power and Black excellence really look like today and offers a way forward in a new age of Black prosperity and pride.

"A comprehensive and unvarnished look at the state of Black America...[this book] will almost certainly serve as one of the most important works of his career." (Rolling Out)

"[This book] gathers a dream team of Black leaders, influencers and celebs.... Together, they have a series of honest, compelling conversations about the State of Black America." (BET.com)

"Ed Gordon is one the most important journalists in American history. In this powerful book, Gordon showcases his unparalleled ability to pull the freshest insights from the most unique and important voices in Black America. The conversations in this book offer the type of critical analysis, fresh insight, and unshakable hope necessary to move Black America into new levels of freedom and prosperity. Conversations in Black is urgent and pathbreaking text." (Marc Lamont Hill)

Why not use the interviewees?

The audio version was good but it could've been better had the participants read their parts. The voice actors trying to "sound" like them was a little jarring the first time I heard it. Each person could've recorded their parts in it's entirety and then cut and splice where each section was needed. The voice actors didn't take away from the overall experience but it lent nothing to it either.

I have been a supporter of Ed Gordon since his BET days. When I heard him speak on the Steve Harvey radio show and when I watched his interview on the Breakfast Club I knew I wanted to read this book. This book embraces many topics that we in the African American communities have had close net circles. I loved the perspectives from legendary activist like Harry Belafonte to social conscience rappers like TI and Killer Mike. I hope this book starts many conversations in barber shops, beauty salons, fraternity and sorority meetings, and eventually starts a change not only in our mind set to actually bring about positive change in the world. Superb job Mr. Gordon. My only suggestion, I wish the people who where involved in the book where able to narrate their parts beside Ed Gordon I understand that would have been a tough task.

...but look over the performance. The readers are not the original speakers and I prefer to hear the voice of the actual speaker

learn us, love ourselves and make epic strides

worth the read. Good points to start conversations at beauty and barber shops, churches, even at a city park while we watch our kids. I recommend highly. This can be great but we have to want it to be great- let's GO!!

This book sheds light on the real struggles and plights of African Americans. A must read and conversation starter not only for blacks, but for anyone who's truly interested in making a positive difference .

The book is exactly how it sounds. Ed Gordon asks very thought provoking questions about society, black culture and the black community and prominent figures in the black community respond to these questions. It’s like a long interview with many different people. I highly recommend this book for anyone trying to gain a new perspective or just trying to understand black culture in America.

Ed Gordon's voice and those of his interview subjects are salient and reasoned. I was enlightened by their insights.

in depth exploration of today's issues

loved it! thanks very much for your courage and honesty with challenging topics. I learned a lot!