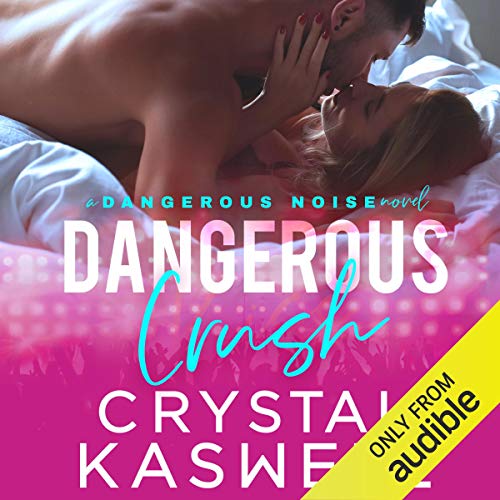 Rock star Kit Lockhart can have any woman he wants...any woman except her.

Piper Strong is tired of being the innocent one. So what if she's a virgin who avoids booze? That doesn't make her naive. Why is it she's supposed to know exactly what she wants at only 19? She studies hard. She hangs out with her friends. She tries to date, but she keeps comparing guys to Kit. And no one has his soulful eyes, or his dark hair, or his deep chuckle.

Kit Lockhart is on the straight and narrow. The brooding bassist is fresh out of rehab and ready to resist temptation. Like the feisty blonde who has been crushing on him for ages. His best friend's kid sister is off limits. Only she's not a kid anymore. And no matter how hard he tries, he can't see her as anything but a woman. A woman he wants in his bed. Now.

Kit can't stop thinking about her blue eyes filled with pleasure. Her pink lips parting with a groan. Her soft body under his...

He'll get over it. The two of them together equals the end of Dangerous Noise, and Kit's not about to lose the only family he's ever had.

Dangerous Crush is a full-length stand-alone romance with a brother's best friend theme.

Addiction affects so many people nowadays and the the struggle is definitely real. In this second instalment about the band Dangerous Noise, we get Kit's story. He is a recovering addict, fresh out of rehab and is trying his hardest to stay clean. He has always thought of his band members little sister Piper as sweet and innocent. At 19 this is not far from the truth. Piper had always admired Kit and they both have shared abandonment issues and always feeling alone. They form a beautiful friendship and even though Piper wants more, Kit knows he is no good for her if he lapsed in his recovery.

I loved their chemistry and the bond they formed with one another. The narrators again really made this story come to life. I can't wait to hear Joel the drummer's story, i'm sure it will be another epic tale.

Piper is the younger sister to Ethan and Malcolm who are in the famous band Dangerous Noise. Piper has secretly crushed on Kit who is the bassist in the band for years. Kit has been seeing Piper in a different light the older she has gotten and as their relationship evolves you see them both maturing and developing a sweet relationship.

Kai is a fantastic Piper and Wen is always making me melt no matter who his deep sexy voice is portraying. This team is fantastic and are a favorite of mine.

I love all the Dangerous Noise boys, but Kit is my favorite. Is it because he plays the bass? Maybe, Maybe.
Everyone who has a brother knows he's got some friends you are into. That is how Piper feels about Kit. Good thing he likes her back. He tries to be a good friend to Ethan and Mal, but when you want to be with someone, you just have to!

Of course, Wen Ross as Kit was awesome! He really got his style and the feel of him. As always, Kai Kennicott made me actually feel like I was in Pipers head!

Another wonderful story by Crystal. Quite emotional and a good lesson to many. I can’t say enough good things about Wen and Kai. They are the perfect narrators!

I'm loving the series, the second book was as good or better than the first. Kai and Wen's performance was spot on, as usual. I can't wait to settle into the next one.

I was given a free copy of this audiobook in exchange for an honest review.

If you could sum up Dangerous Crush in three words, what would they be?

What does Wen Ross and Kai Kennicott bring to the story that you wouldn’t experience if you just read the book?

the lady and man voice! they are great at reading the books

I cried and laughed both

I absolutely adore Kit and Piper! This is my favorite book in this series! I love the slow moving friendship /relationship between Kit and Piper and her acceptance and understanding of his past addictions. I love that addictions were discussed and not ignored because it is an important and evident issue that everyone should embrace not ignore!

Better than I imagined!

So I'm not usually an audiobook person, finding that the voices don't match the characters in my head. In Dangerous Crush, the voice for Piper was spot on for me right from the first page. The voice for Kit grew on me as the character developed. By the end, I loved listening to the audio book and felt the chemistry between the voices (I didn't know that was possible!).
I had read the book previously to listening to the audio, but the audio lived up and surpassed my own mental images and internal voice.

Words can not possibly describe how much I love this couple. Kit and Piper are great. I love how they text/talk all the time at first about everything and nothing at all. Building a true friendship. Serious, relationship goals.

Where does Dangerous Crush rank among all the audiobooks you’ve listened to so far?

The scene when she had just had a fight with Mal over attending there parents award thing and she needs a should and Kit is there.