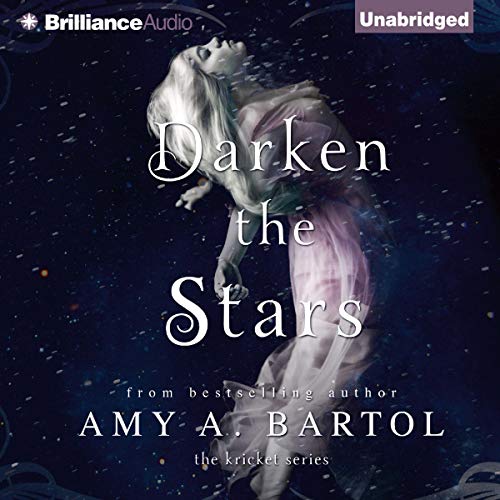 Kyon Ensin finally has what he's always wanted: possession of Kricket Hollowell, the priestess who foresees the future. Together, their combined power will be unrivaled. Kricket, however, doesn't crave the crown of Ethar - she has an unbreakable desire to live life on her own terms, a life that she desperately wants to share with her love, Trey Allairis.

As conspiracies rage in the war for Ethar, Kricket's so-called allies want to use her as a spy. Even those held closest cannot be trusted - including Astrid, her sister, and Giffen, a member of a mysterious order with a hidden agenda. But Kricket's resolve will not allow her to be used as anyone's pawn, even as the Brotherhood sharpens its plans to cut out her heart.

As the destiny prophesied by her mother approaches, Kricket will backtrack through her fiery future to reshape it. For she knows one thing above all else: the only person she can truly count on is herself.

I'm disappointed with the ending. not your typical happy ending. I may have missed parts while listening.
I need to listen to the 3 books again to fully understand why this FOOLISH GIRL did what she did. I groaned in disgust while listen at work and my coworkers are now worried. haha
excellent narration by Kate rudd as always.
will edited my review after listening again. just...so...disappointed. :(

Again, Kricket is the best thing in the whole series. I love this character and I do love how strong she is. On the other hand, I have mixed feelings about the ending to The Kricket Series. On the one hand, it does showcase Kricket's strength of character and will. On the other hand, I guess I was hoping for something more conclusive for the ending. I feel as if the series should not ended at that point.

What aspect of Kate Rudd’s performance would you have changed?

I love her voice for Kricket and Phlix. But I do feel that the voices for the male characters (especially Trey) leave a lot to be desired. Trey's voice in Book 3 sounds different as compared to Books 1&2

Was Darken the Stars worth the listening time?

As someone who has listened to all three books, I feel a little sad about the ending.

TO be fair, I enjoyed the majority of the series. It's finally good to learn more about the Alameeda side and Kyon. And I'm glad the whole cat and mouse game going on in Book 2 is no longer at play in Book 3.

It's just that it makes me feel so bad that I've spent hours devouring this series only to have an ending that left me thinking that it should not have ended at the point where it did.

Overall, I love how the series showcases Kricket's smarts, courage and determination. But again, I feel that the ending will be a disappointment to long time fans of the series. To my knowledge, this is the last book of the series. And I feel that a lot of things remain unresolved by the end of it.

Open-ended finales are usually ok with me if the book had been something under the "Slice of Life" genre. But as the series is more into the realm of sci-fi/fantasy, I feel that the ending (while not a downer ending) left a lot to be desired. Maybe this is just me being a Kricket fangirl. But I kinda wished more for her ending

Loved the story, but not so much the ending.

The story was great and adventurous, but the ending left you wondering if there was going to be a book four or maybe a spin off story with the sister....but after research I found out this was it. Major let down if you ask me.

Too much unresolved.... *Spoilers

Would you ever listen to anything by Amy A. Bartol again?

What does Kate Rudd bring to the story that you wouldn’t experience if you just read the book?

I liked the narrator!

Yes yes, I get it. Once an island, always an island. The ending was supposed to spotlight on Kricket's strength, intelligence, and determination.
... ...But I am severely disappointed. I grew to love Trey, Wayra (sp?), and Jax. Books 1 and 2 made them her "family"... and then they almost don't even exist in Book 3. I also found the Kayon and Kricket romance really really hard to buy. It felt very forced and completely pointless. The whole time she kept talking about how she was going to figure out how to get the upper hand, I thought the romance was her way of fighting for control of Kayon.. ... And then there was Trey's statement in Book 2 that no matter what happened or if they were separated, that him and Kricket would pick up the pieces together. I really thought that would come full circle... but no such luck.

Overall, the ending made me wish I'd never started the series. It just made me feel very frustrated and unsatisfied. I adored the first 2 books...and I actually liked the 3rd until I realized she was supposed to be in love with Kayon. Then I started to see the writing on the wall that this wasn't going to be a reader friendly ending.

What did you love best about Darken the Stars?

Amy Bartol Really gives you time in her cosmology to soak it all up. Kricket is not your average main character. She's complex and makes it difficult to know what will happen next.

What other book might you compare Darken the Stars to and why?

If you like this, you'll likely enjoy anything by Laini Taylor and Melissa Marr.

Kate Rudd always does a brilliant job. This was fantastic too.


I was moved by how overwhelmed Kricket was by Phlix's affection. Beautiful.

*Smallish Spoiler Alert*
The book took some very unexpected turns. Some people may get angry about it. But I think it stayed true to the characters. In some ways though, I'm not sure anyone will be happy with any of Kricket's future romantic choices because they may feel a touch betrayed by this book. Again, I think her choices were totally in line with Kricket's character and how she was raised. I'm curious to see what happens next.

And let me just say, that I do NOT think that there is a real love triangle here (contrary to some other reviews). She never says she loves Kyon, though sex definitely seems to be making her feelings confusing for her. To me, she only ever truly loves Trey. I think it's clear and I don't understand why people are confused about this. Sure, it's tough for most of to imagine how they could ever be together after that. But Kricket is the definition of a survivor.

Loved this series but, the ending ruined the entire series. So disappointed. It was so bad I almost wished I had not read any of them.

What made the experience of listening to Darken the Stars the most enjoyable?

The ending was vastly disappointing. About 1/2 way through the book I started to wonder how she was going to wrap it all up and not leave an abundance of loose ends. By 3/4 of the way through, I knew it was going to end badly. There was way to much of the story left untold and not enough book left to cover it all. If this is the last book in the series, then this series is one of the worst I have every read. There was so much of the world, characters, and relationships left unexplored and untold. What makes it so disappointing is that the overall story had a lot of potential. Parts of the story were done well, while other parts were rushed and poorly developed. To finish the story and wrap it all up, it needs one or two more books, at least. I want to know more about Kricket's dad and mom, her sisters, the lost boys, etc. And the whole Trey thing. How did we go from book 2 to this? I really hope Ms. Bartol isn't done with Kricket's story. I am worried that this is it or there would have been no reason to skip over so much of the story just to force an ending. I usually don't leave reviews, but I am passionately disappointed.

The scene where Kricket kicks the Priestess's butt.

I was moved to anger by the unfinished plot lines and underdeveloped characters and relationships.

First 1/2 wasn't bad but the rest left a lot to be desired. If this is the ending we can expect in her other series I will be very disappointed.

Loved all three books but I'm so disappointed in how she ended this series!!! I hope she surprises us with a fourth to give us a satisfying ending!!!

I loved these books. I laughed and cried through Darken the Stars. It was truly an emotional roller coaster. I didn't want the book to end which is why it got 4 versus 5 stars. Needed more....I'm hoping there is more....please let there be more!!!!!