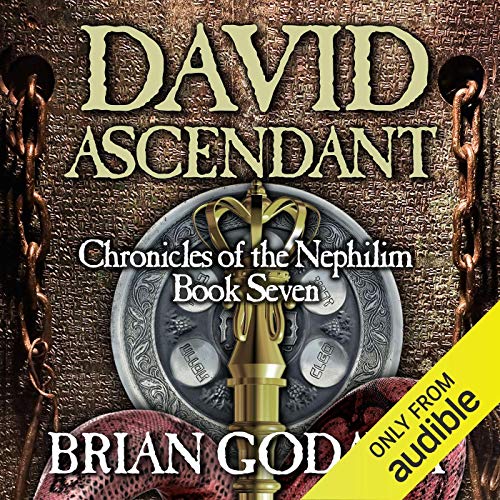 Six Giant Assassins. Goliath Was Only the First.

Everyone thinks they know the story of David.

No one has heard it told this way before.

In the days of Samuel, Israel’s worst enemy is the Philistines: bloodthirsty worshippers of Dagon the fish god.

Goliath is but one member of an elite warrior cult of six giants, The Sons of Rapha, whose sole ambition is to kill the promised messiah king of Israel.

As David rises, he must flee the demon-possessed King Saul, avoid assassination, withstand the seduction of a Philistine queen, conquer the last of the giants in Israel, and overcome his own weakness for many wives.

This gritty romantic action-adventure story will take you places in the Bible you’ve never seen before. There is so much more to the story than you ever realized.

The War of the Seed continues.

David Ascendant is the seventh book of the series Chronicles of the Nephilim, a biblical epic story of the fallen angelic Watchers and their offspring, the Nephilim giants of Genesis 6.

Great entertainment. Only that some timelines are off. Goliath could not have killed Eli's sons.

Otherwise, the author should be given creative license for a work of fiction. Some will say this book and Abraham Allegant was too graphic. Students of history would not be surprised when reading of the debauched acts of the ancient world. Students of the Bible will know that the Bible doesn't hold back on some of the more unpleasant details. Godawa just chose to include these in some of his works only to move his story forward.

This is great storytelling added to the recounting of past events and characters.

Made it though the first 6 books, but had to stop

Godawa's proliferation with creative and too frequent deviant sexual imagery. Yes, fallen angels had sexual relations with the daughters of men. So, there is sexual attraction. But the author's apparent obsession with bringing this lust into all aspects of the story, is disturbing. It refocuses the story from the biblical account to a particular audience that maybe prefers this abnormality. Which in my opinion is not the christian audience.

What could Brian Godawa have done to make this a more enjoyable book for you?

Less perverse sexual descriptions and imagery. The offending phases were carefully crafted to avoid the graphic language of the day, but ended up sophomoric. The obvious translations into today's speech were clear. A wolf in sheep's clothing became my primary thought through this book. I had read the first 6 books and this element was increasing as the books progressed. When David urinated on Goliath's head that was the last straw for me.

Did Brian Godawa do a good job differentiating all the characters? How?

His weaving of obscure bible places and probable causes for why the biblical stories unfolded. For example, why Goliath taunted the Israelites for so long was developed nicely.

An obsession with deviate sexual acts is perceived as an author's addiction. This seriously undermines his credibility to treat the biblical accounts and characters as holy.

If you could sum up David Ascendant in three words, what would they be?

What was most disappointing about Brian Godawa’s story?

It was way to graphic when it came to the sexual parts.

If you could take any character from David Ascendant out to dinner, who would it be and why?

i can't recommend his books because of his explicit descriptions of sexual encounters. Way, way too much information.

I listened to the first book in this series and really enjoyed it. I don't want to be a prude but this book had potential if it weren't for the (what I can only describe as) soft gay porn segments. I was taken aback by it, and although I think I know what the author was trying to convey, these segments were unnecessary and I believe he could have taken another route to convey the immorality of the Philistines. In three words...TOO MUCH INFORMATION. I didn't finish the book. Brian...Please keep in mind that if you are going to market a book as Christian fiction you may want to make the assumption that your reader base doesn't want strong references to gay sex and child rape.

I was not expecting such vivid portrayals of homosexuality. I think there could've been less of that and I would've given this a five star rating but because it appeals to those inside the faith that really try to avoid those types of images, I think the author should have done a better job of not being so vivid with those scenes.

Brian Godawa does a great job of bringing to life the stories of the Torah. Some of the descriptions are gory, barbaric and lascivious not meant for the young or squeamish. I would give it a five if there was are more PG version but I am great full for Godawa's use of the Torah and other ancient texts such as the book of Jasher and the Zohar. I have followed the whole series and wait for the next one Jehoshua on audio.

i can definitely here things that were not so obvious in biblical texts that I believe took place in the past and are being kept very secretive to this day. ..even by the watchers

Watch the Bible open up!

You ever ask yourself those "scratch your head" questions about some things in the Old Testament? Ones that not quite know "why is that in the scriptures?" or "how could that really happen?" Well, these books on the Watchers just like this book David the Ascendant will give you a more of a 3D outlook. Then you will find yourself just can't wait to get into the scriptures for yourself. Brian did a great job not just writing this/these book but even greater reading them.

The book was fascinating and engaging all the way. Very, very impressive. I can respect the author's approach to mature content, but perhaps some of it did not have to be so blatant and graphic. I did not find it as shocking, because I have read the previous six books. Personally, I felt that "Abraham Allegiant" was much more graphic and unnecessarily so. However, these books have challenged listeners to re-examine Bible stories in ways that many may not have considered, which is an important aspect for any person, especially in faith. God is a creative God, and I think Brian Godawa has utilized his gift of creativity very well with this material.

A familiar story made into a Thriller

This is the 7 book in this series.If you are into ancient manuscripts,and the bible,with a twist of fantasy,this is a good series.I'm about to purchase the next one.I enjoyed this book.